Back to From the World Next post: Lava Space

From the World October 17, 2021
By Yentl TouboulNo Comments

Type “see-saw” into dictionary dot com, or flip open a hardcover version of the thing if you still have one laying around from your learning days, and you’ll see that it describes a rapid and repeated change of condition, situation, or position from one place to the other, over and over again.

The SEESAW you see here is a visual vignette of echoing ocean conditions, volatile changes in the sea and the interaction that evolves around it.

“The idea for the project came off the back of the Variety series that João Tudella and I worked on through last winter,” says surfer Noah Lane. “We wanted to develop the original concept exploring the different ways you can interact with the ocean and try to inspire a connection through surfing but in a more palatable format.

“João spends loads of his time filming Atlantic wildlife and I know nothing other than the ocean so we both care a lot about it. We were on the same page and felt like there’s a lot of incredible, informative films out there but many of them leave you feeling guilty, shamed, or jaded about the message. We wanted to strip it back to purely beautiful visuals, sound, and obviously the thing we both know, surfing.

“The idea was that hopefully the viewer might find something in there that rekindles or sparks an interest in the place that means so much to us. It’s a convoluted way to explain a relatively simple film but at the end of the day, the process was as much for us as it was for whoever watches it. Attempting to make sense of an environment that often defies understanding.”

Noah is one of our favourite’s, and it’s great to see him deliver a wonderfully original film with filmmaker João Tudella. Offering an original score from composer Tiago Perestrelo to accompany is a fantastic touch as well. 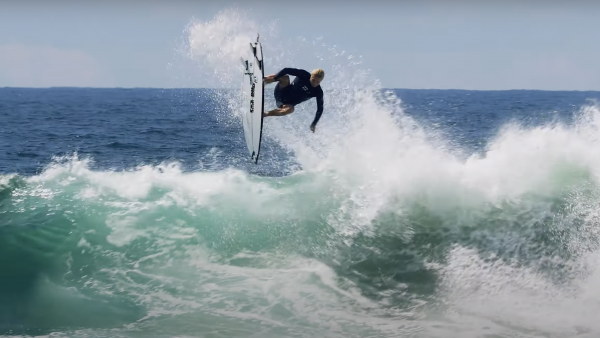