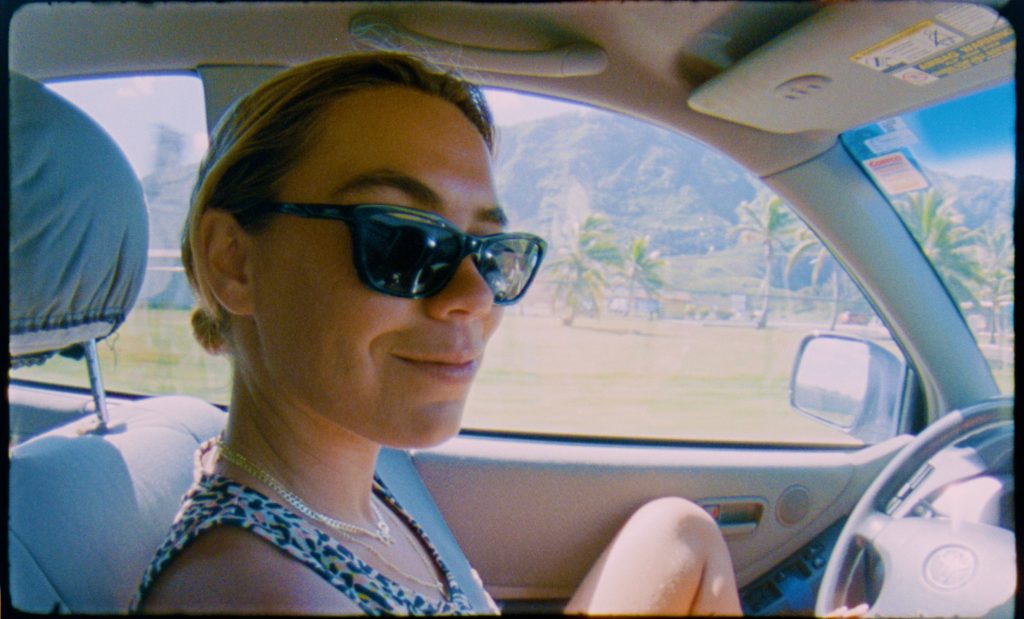 It was only six weeks ago we were kicking back on the North Shore, sipping on Longboard lagers, watching the sun set from our spot at V land and the only thing we could complain about was how expensive Foodland is.

Since then the IPCC has issued it’s bleakest warning yet, the Amazon rainforest is at tipping point and we’re pretty much on the brink of World War Three thanks to a Russian sociopath who appears to have lost all sense of reality and morality, if he even had any in the first place.

The consistent swarm of negative breaking news alerts is overwhelming right now. And to be honest, it just makes us want to switch to airplane mode and go back to Hawaii as soon as possible. Which is why we reached out to our new found friend Zoë McDougall to take us back, figuratively speaking, via the best (albeit cheesiest) of Hawaiian cinema. The world needs a little aloha right now. But don’t worry, Aloha didn’t make the cut.

If you’ve ever had the pleasure of meeting Zoë, you’ll know she’s one of the most genuine humans out there. As easygoing as they come and with the driest sense of humour we’ve encountered on U.S. shores. Killing you with kindness whilst simultaneously destroying you with razor sharp banter. She also fucking rips. You only have to watch her most recent clip Never Have I Ever, to know she’s destined for great things.

But that’s enough ego stroking for now. Without further ado we’ll hand you over to Ms McDougall for a Hawaiian film special to keep your mind off the fact we’re all on the brink of extinction.

With careful thought and consideration I’ve come up with a list of films that collectively display what Hawai’i has to offer through the lens of the film industry. As a disclaimer, Hawai’i has always had a love – hate relationship with film. Being the complicated and widely diverse place Hawaii is, no one of these films alone have remotely succeeded in depicting Hawai’i accurately as a whole, yet each of these films contain a few small moments that represent a different aspect of what one might experience on the island. Growing up here on the North Shore, my interpretation of home may be different than others. In a place where localism is warranted, I like to keep it light and all laughs. You will find no war films in my list, but I wanted to rather headline the importance of native Hawaiian History through films that share the culture, which reigns supreme importance overall. As much of an escape as this island is for everyone who get to experience it for the short while they visit, it is real life for the rest of us, and I promise you that your time here will be much more fulfilling if you reserve a little time to learn about the Native Hawaiian practices and the magic of this way of life. That being said, on the other end of the spectrum, this pacific melting pot breeds some of the funniest characters you will ever meet and as outrageous as Hollywood may portray them, these parodies may contain a glimmer of truth.  Though the theme of this was meant be “Hawaii”, to me it shouts “Sunset Beach Elementary School Childhood Nostalgia”. From historical to hysterical, Please enjoy though the eyes of a North Shore offspring.

With Love and Aloha,

For obvious reasons. This movie is a staple and was spoon fed to us young female surfers just like an açaí bowl. As corny as it is, this movie is more relatable to my life here than I would like to admit. I also have a special satisfaction for a Hawaii set movie where people play themselves, that makes it for me.

There is the Beach boy, Maitai, ABC store, tourist destination version of Waikiki that we all know and love(?) but then there is the cultural significance of the land before it became what it is now. Kapaemahu is an excellent short that tells a beautiful story and paints a picture of important Hawaiian history and culture in Waikiki, pre-contact with settlers. A must watch before the next time you visit the south side strip, plus it’s the first Hawaiian film to be considered for an Oscar nomination of best short.

Who doesn’t love a cheesy early 2000’s rom-com set in Hawaii? Don’t answer that, but they are my favorite. Plus, anytime I show someone the east side of the island, I automatically point out Hukilau Cafe and say “That’s where 50 First Dates was filmed”.

A historical period piece on the life and love story of Princess Ka’iulani and the overthrow of the Kingdom of Hawaii. Note the part where Princess Ka’iulani flips the switch and lights up the Iolani Palace, this is significant because the palace had electricity before the White House in America, which for some reason many people don’t know.

All the lords of North Shore big wave riding creating the legends. The cowboys of the wild North. Also features Derek Dorner on the steps of the house I grew up in before it was really a house, it was more of a board shack. People over 6ft tall can’t stand up straight in that house haha.

Yet another romantic comedy from that magical time in early 00’s film making where everything is sentimentally cringe, featuring familiar Oahu faces and places.

Ohana means family, and family means no one get left behind.

Cliché with some legitimate lessons, including; people here only work when the surfs bad, when the wave breaks here don’t be there, and most importantly don’t mess with Da Hui.

Get the shrooms out.
Robin Pailler
From the World
November 29, 2022