Titouan Boyer, known by his proche amis as ‘Tits’, is about as underground as you can get; Quiet, on-hand and never far from a pint of beer. Originally hailing from the French Carribean he now calls Brittany home.

This young man has an affection for CI blades under his solid feet and his surfing has strong undertones of a young Mr Reynolds. Such down carves! Those transitions! Straight airs landed with much gusto!

So when our favourite Basque team manager showed us a video of Tits which had yet to see the light of day, we asked if we could get something going before the release. We hadn’t crossed paths since our trip to Ireland last year so we did as we often do… Picked up the phone and jumped on facetime to ask him some questions about his new passion piece, ‘Frustrations’.

Tits how are we?

All is well thanks! The sun is shining and the waves are looking good today.

Let’s start with a little background info for those who aren’t familiar with you..

So I’m Titouan Boyer. Twenty three years old, born and raised in Saint Martin, an island in the French Caribbean. I’ve spent most of my life in Brittany, located in North West France which is where all of my family is from. I was born on the islands and came back to France when I was about 15. There’s a few of us who did this… I grew up surfing with the likes of William Aliotti, amongst other pros who’ve moved to France for a change of life. I competed a lot on the French circuit in my younger years but now I just freesurf… I spend my time going on as many trips as possible and stacking clips. Think that’s it in a nutshell.

When it comes to surfing in France the focus is normally always on the South West and Hossegor. Tell us a little about Brittany. It’s not somewhere which is really on the surf map outside of France?

Well that’s the reason I love it up here, because it’s far more chilled… there’s less people for starters and certainly less ‘pros’. This morning I checked the waves and there was 2 people in the water and the waves were actually decent. It’s definitely not the same quality of wave, but I’ll take shittier waves over crowds all day long. Every time I’m in the Southwest there’s at least 50 people in the water. Brittany is mostly beachbreaks but we also have some cool reefs and slabs which work when it’s bigger. There’s a lot of fun spots which light up in the Winter. It also gets a bit colder up here but I don’t really feel the cold too bad, and wetsuits are so good these days it doesn’t bother me. Brittany is where I call home!

We’ve been meaning to visit for a long time. Run us through a typical day at home.

So if there’s waves we’ll try to get a morning surf in. Lunch and then do it all again. Once surfing’s done we’ll all head to the local for beers. Pretty straight forward. If there’s no waves I’ll usually do some painting. And then the pub.

Any local heroes? Anyone who’s inspired you from there?

For sure there’s a bunch! My biggest influence would probably have to be my Uncle Stefan who grew up surfing here in Brittany and one of the first around here. I really respect and look up to people who work in a completely different line of work and surf no matter what if the waves are pumping or suck in the dead of winter. I’ve got friends who are commercial fisherman who will come back and jump in straight off the back of a long trip. I would have to say that the people who I surf with regularly are the people who influence me the most.

We’ve noticed ATS written on all your boards. Is that your local surf shop ?

So  that’s my uncle who I mentioned previously who actually owns the shop. It opened back in 1995 so it’s been around for a while and  was my first sponsor. Naturally he was keen to support me from day one… he literally gave me all the stuff I needed when I was coming up. It was just super organic and I’m hyped to still be supported by them!

And how long have you been on Vans?

A couple of years now.. I think they hit me up to ride for them in 2020? It was right in the middle of the pandemic so we haven’t don’t too many trips all together with the Euro squad yet. We did a trip to the Basque country with Adrien Toyon, Seb Smart and the crew at the start of last year, and then obviously we got to go to Ireland with you guys last Autumn which was epic. Looking forward to more trips this year! 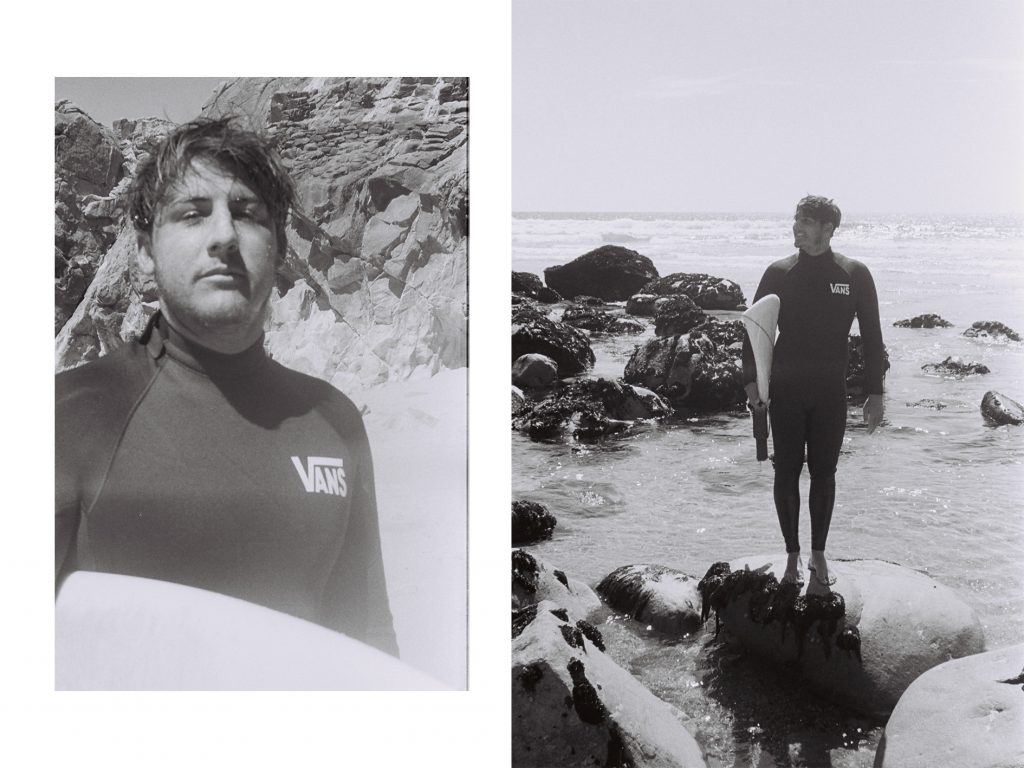 Right so get to the real reason we’re here. You’ve just launched a new video called ‘Frustrations’ which you did with your friend Quentin. When did you guys film this?

Once I got on Vans I really wanted to work on a video project and we shot most of the surfing last winter. We then put it together with the other art stuff a little later. I didn’t really know how to go about putting it out… I don’t really have any contacts in the surf media so I’ve been kind of sat on it until now haha. When I showed it to my TM recently, he was loving it and wanted to get it out right away… So I guess that’s how we are here now.

For those who haven’t yet watched the video can you give us an insight into the video. Why have you’ve called it ‘Frustrations’?

Most things I do frustrate me because I feel I can do better but in this case it relates more specifically to surfing. Going for a surf and having an atrocious session. Sat in the wrong place. Not catching a specific wave, and the worst is picturing something you’re going to do on a wave and getting no where near. Be it the conditions or my surfing. 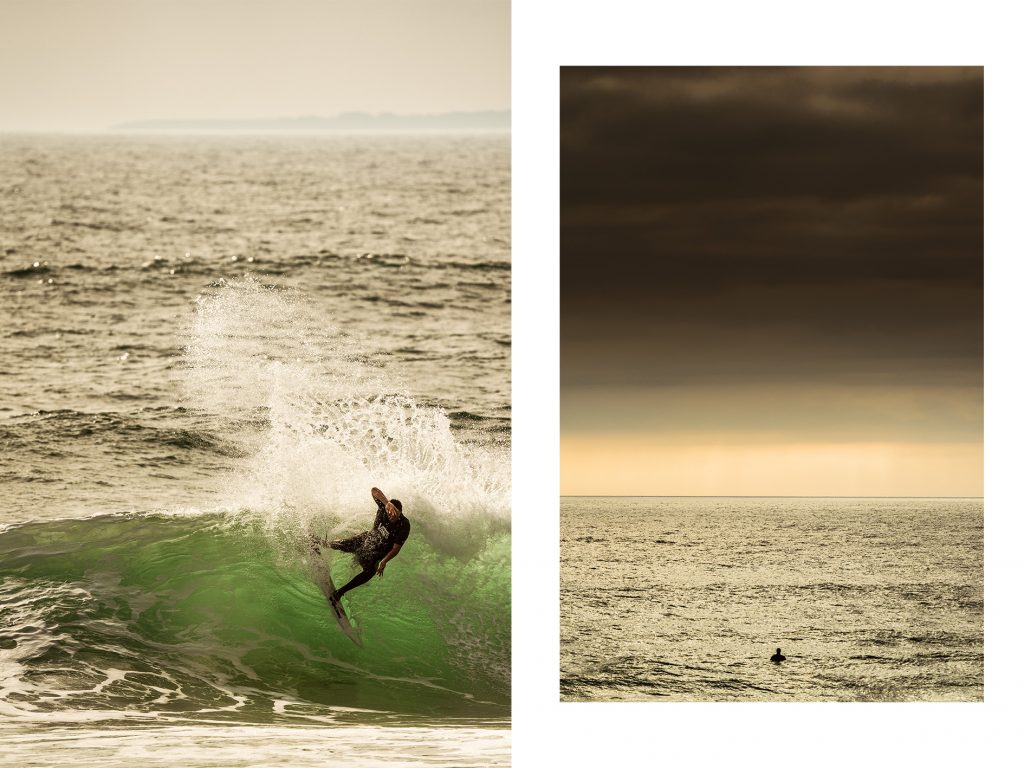 In the video you mention people potentially thinking you have a bad image. Can you elaborate?

I was a clean cut contest boy for a while and then all of a sudden I stopped competing and was partying a lot and having fun. It’s probably just me tripping more than anything but I felt some people were hating on me. I’ve had negative comments come back to me through the grapevine and I know some people have talked shit on me. The surf industry is a bubble so most stuff gets back to you… But anyway you can’t please everyone.

Let’s talk about your art as that’s a big part of the video and we didn’t actually know that you painted before this video!

My Grandad’s an artist so he’s the one I have to thank for picking up a paint brush. He’s been painting for over forty years and I’ve always seen him paint. For me it started with painting my boards… I always did it as a grom. I always did paintings de merde on them! Then when I wanted to sell them I never could because the artwork on them was so fucking bad. I really started painting around 4 years ago, right around the time I stopped doing contests. I stopped surfing for a little bit, I was over it and had no more motivation and I found painting was a good outlet. I started watching documentaries on artists and getting inspired. I found that once I started painting the time went fast and I felt really happy.  I now have a really good balance between surfing and art. 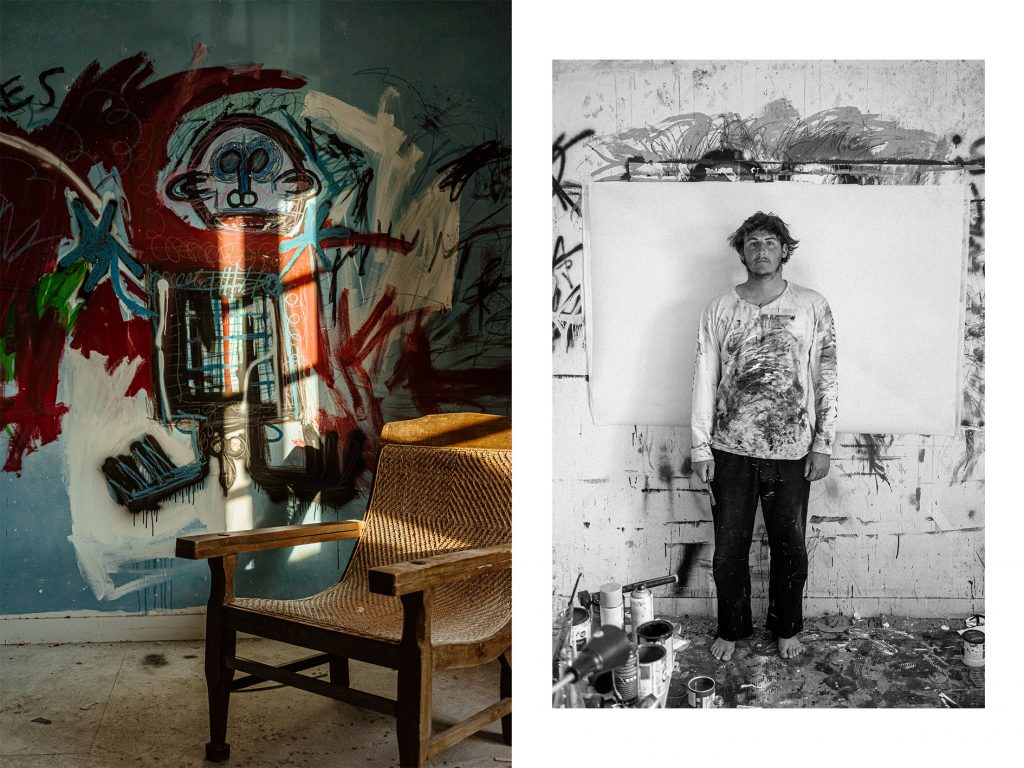 Which artists inspire you the most?

I’ve never taken an art class and I still draw horrendously but someone I could always relate to was (Jean-Michel) Basquiat. His stuff is sick. My biggest Inspiration would have to be my Grandad as he’s the reason I started. My sister too when I was younger as she’s always painted just for fun. I’d watch her paint a lot growing up…They’re my biggest inspirations.

Have you ever thought about exhibiting your work?

Not properly. Last year I had a small space in my hometown where I hung some of my work (which you see in the video) and I told family & friends to pass by and have a beer.. It wasn’t anything serious but it was cool to put some pieces on a wall and have people come through. It’s definitely something I would like to do again… maybe on a bigger scale.

Going back to the video, can you tell us a little bit about your relationship with Quentin who filmed the piece and put it all together? He’s a good friend of yours right?

We’ve known each other for a long time… Quentin’s a little older than me. Thirty I think? When I was a grom on Ripcurl we used to try and link up here and there to film some sessions but never did any proper trips. We got to know each other slowly over the years.

It was great to work on this project together as we’re now good friends I felt comfortable talking in front of the camera and nothing was forced. We’ve been on a few trips recently, Portugal and Indonesia before COVID, and he joined me in Ireland after our trip last year. We plan on going back to Portugal in a few months and hopefully score better waves than last time.  As he lives close to home we try and link up when the waves are worth filming here in Brittany.

Any last words to make people watch the video?

Well it’s not a full surf edit but I hope people still enjoy the concept! A huge thanks to my family for always supporting me and of course Vans, ATS and Marc at Atao surfboards for sticking behind me!

An undersea dystopia.
Robin Pailler
From the World
October 7, 2022

A hypnotic portrait of Sofia Ramdan.
Robin Pailler
From the World
October 4, 2022