Skip to main content
Close Search
Back to Concierge 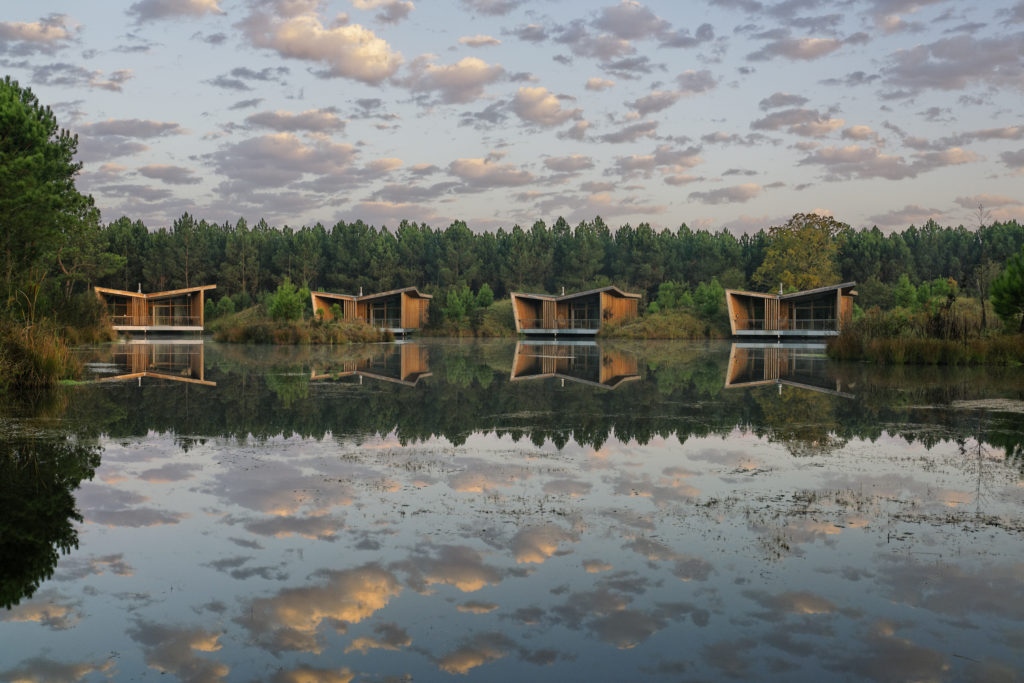 Having spent most of the past 5 years since the beginning of Wasted Talent’s conception on the run, a veritable by product of which is the amount of time we’ve spent in hotels.

Ranging from dusty floors in South Africa to suites in Tokyo, we’ve by hook or crook covered pretty much the entire spectrum of lodgement.

So we thought it’s high time to put together a little black book of our favourite places to stay the world over, and no better place to start than Les Eschasses, literally in our back yard – just out the back of Hossegor in the little Village of Saubion.

So without further ado; Les Échasses.

Founded by Thomas Le Thierry, and his wife Claire, Les Échasses is a real people story. Les Échasses is the result of a 20 year dream of a sustainable hotel, and house for their family.

“I don’t need a big house, it’s better to have a hotel you can share with others. A pool that is open to guests and not just used a few days a year by my family”

Thomas Le Thierry is an inspirational man, with a solid career heading up one of the world’s largest media companies, his words and measured and careful but with a glint in his eye and a keen sense of perception that inspires confidence and intrigues. His travel schedule from Monday to Friday will often be NYC, LA and Tokyo – yet he still has time to press his own jam which guests will enjoy at breakfast.  His and his wife’s attention to detail is evident in every aspect of les Échasses.

“Les Echasses is a good summary of what we like best in this part of the world. A place celebrating our region, but more generally life, culture, music, gastronomy. Its design, architecture and concept makes it an exceptional place, rooted in nature. We hope you’ll enjoy it here as much as we do. We hope you might find it even a little inspiring”

The design was aided by a three part collaboration between Patrick Arotcharen the Architect, Marti Franch the Landscapist and Jean Louis Iratzoki the Designer.  It’s also of note that Les Échasses has a guest to staff ratio of 4/1 which is higher than pretty much any luxury hotel you’ll find worldwide. Superyacht levels of service. Bien joué

“Les Échasses is also an opened and multicultural place, looking inside out to the world around us. Where we promote exchanges, where we support quality over quantity, where push forward what we love; music, cooking, literature, surf, art and photography.

A simple and generous place.” 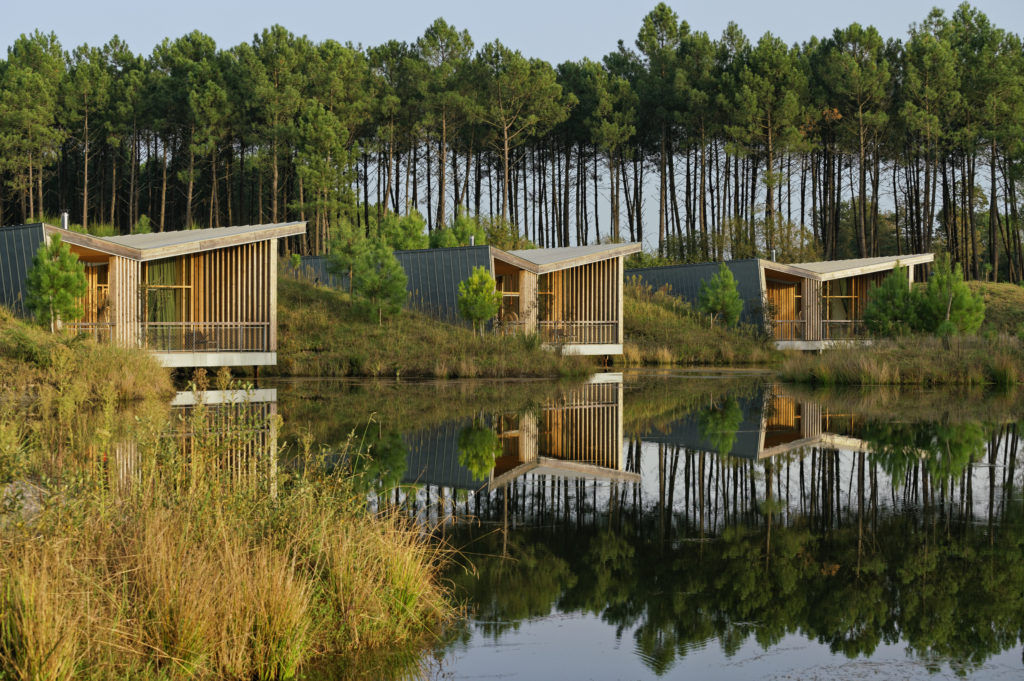 In a word, magnificent.

Formerly a cornfield, as Thomas explains riddled with pesticides now has been completely transformed into a veritable self enclosed eco system centred around two lakes, surrounded by trees and nature. The focal point being the seven lodges and (modges) and one family lodge. Bare in mind that the hotel is set over 6.5 hectares of land and with a maximum capacity of 20 guests if it’s seclusion you are looking for then this is the place for you.

Each morning, the day’s mood is reflected in the lake – whether rain or shine, the large open skies of Les Landes are reflected in the lake. With the sun inspiring a day by the pool or a surf on the nearby beaches of Hossegor which are etched into our hearts. And in turn the raindrops on the lake mesmerise one enough into spending all day on the hanging chair on the terrace

There’s also just a large amount of land, featuring an enoumous, and above all efficient vegetable garden, providing dinner for the guests as well as hosting 45 thousand bees in two hives. Further afield you’ll find hidden bridges crossing rivers leading to an orchard with hammocks for lazy afternoons where guests are encouraged to Picnic. All in all – it’s hard to leave this amazing terrain.

But if you do happen to be able to leave the grounds, Les Échasses is situated out the back of Hossegor, out the way enough to be in total serenity but within a 5 – 10 minute drive to the beaches of Seignosse such as Bourdaines and Estangot. Biarritz is 30 mins away – our love letter to which you can read here. From there into northern Spain is a hop, skip and a jump.

But you already knew that didn’t you, you clever sausage. 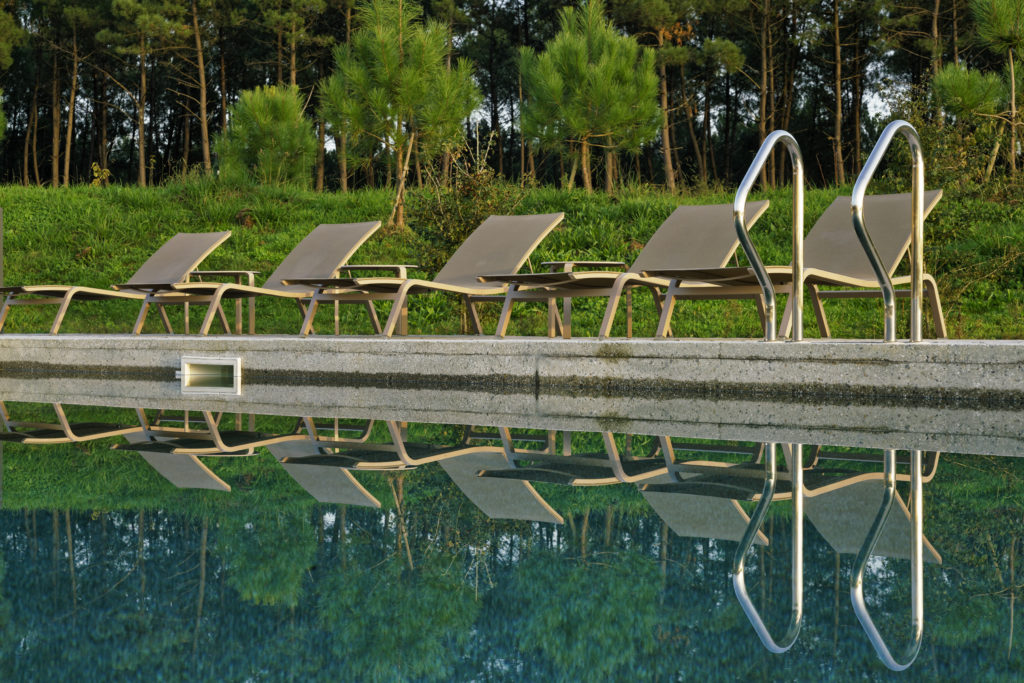 The Pool and Spa are located a little set back from the lake however the command impressive views. The pool is a full length beauty, with varying depths so whether you are in the mood for a grande chill or a few lengths your sweet. The sauna is much as you would expect, but with the options of massages booked in advance

The highlight for us was the Nordic Bath, estenially a wooden hot tub that is wood heated, resulting in a little pool of bliss. Pour your self a generous glass of rouge and you are away.

The restaurant is in a larger building  – again lakeside, and only open to residents of the hotel. Taking the form of a open plan kitchen where the food is cooked in front of your eyes to a large table to inspire conversation between guests. In true French style dinner is a key part of life at Les Échasses, so much so that by summer 2021 Les Échasses hopes to have its own restaurant open to the public onsite. Watch this space. 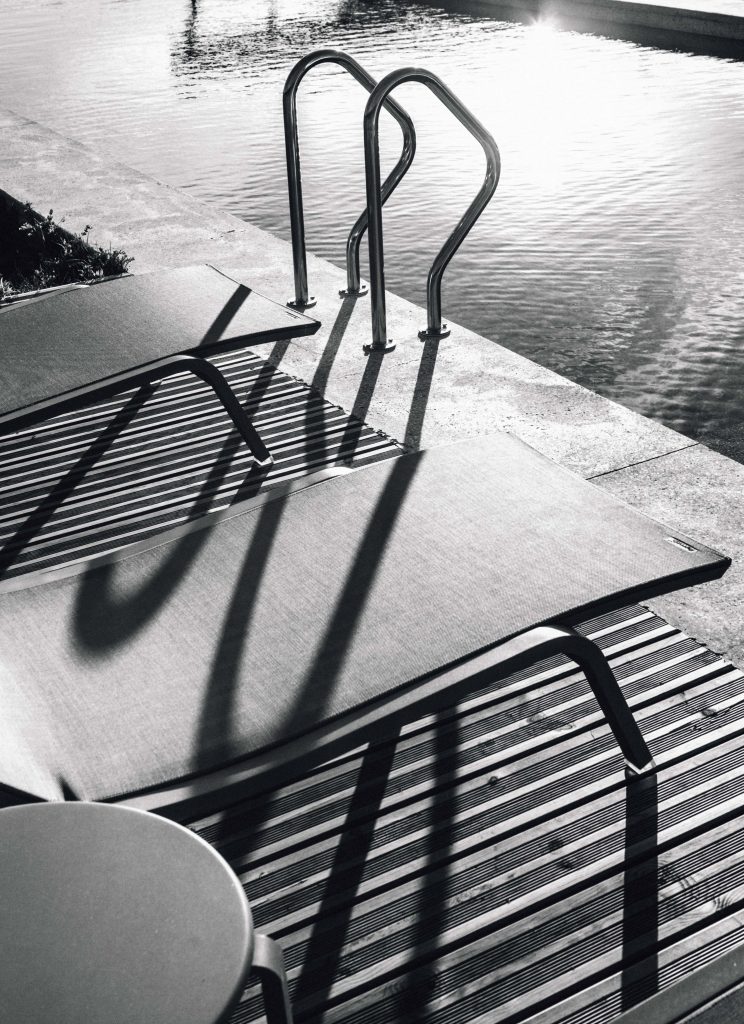 With breakfast taking a simple yet thoughtful take on the continental (read homemade yoghurts, jams and such like). The coffee is exceptional. However dinner is the main event. Served at 8pm, to all the guests that opt in for it – we’d recommend it as part of Les Échasses draw is it’s seclusion, a by product of which there isn’t a whole host of restaurants nearby. We join Thomas in the kitchen for a glass of wine, it’s a really family feeling. We’re only guests present during our stay (mid week, one week after the being allowed to open post Covid) but Thomas informs us that usually the guests sit around and have a chat. It’s an amazingly informal attitude, reflected in the food – sophistacted yet simple. To start we have a cold pea soup with whipped cream, the peas are from the garden “Picked yesterday” . Following that we tuck into Aubergine pate on local bread, again with Aubergine from the garden with a fresh side salad. The main course is an amazing joint of local lamb and to end we have a local cheese and homemade quince. The end price is 35€ which we find to be very reasonable, although Thomas does assure us we’ve had a slightly simplied menu.  However the attention to detail never fails to impress, right down to the sourcing of olive oil from a specific producer in Andalusia.

The food is accompanied by a fantastic, mainly French wine list full of organic wines, each of them personally selected by Thomas and Claire.  The first glass of which was served to us in the Nordic Bath. Pas mal 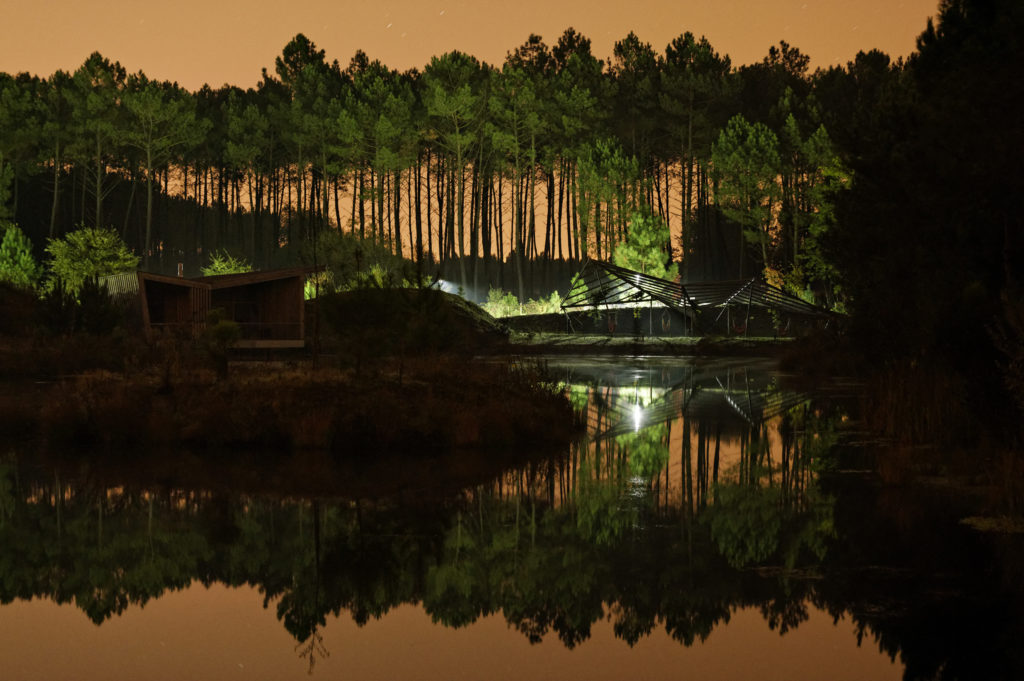 This is where Les Échasses really comes into it’s own. Each of the seven rooms or Modges as they are called is it’s only structure, perfectly suspended on stilts above the lake. Each room is over 50sqm fitted with a wood burner and one of the comfiest bed’s I’ve ever slept in. It’s also of note that all the wood is untreated, and there’s no paint – in fact there’s hardly any chemicals whatsoever in the rooms so you can sleep safe in the knowledge that the air is pure around you. You’ll also find an oversized bathroom, full of Aesop cosmetics and fluffy bathrobes, as well as a complimentary minibar. It’s the little things that count.

“As all the wood is untreated, if there’s any stains we just sandpaper it down, there’s no chemicals in the rooms whatsoever”

With the rooms literally over the water, it’s hard to leave the private terrace of each individual room. Whiling away the afternoon, watching the lake reflec the sky with a glass of organic red wine from their extensive selection does give a certain melancholic je ne sais quoi to one’s existence. Match that with the in room ipad linked to the Sonos sound system in the room and your afternoon just became positively dreamy.

At 300€ a night, at a first glance Les Échasses isn’t cheap – but nor should it be, in fact for the level of service, the exclusivity and attention to detail it’s outstandingly good value. In fact, for a one night stay which won’t break the band, started with an afternoon of enjoying a glass of wine in the hot tub, we’d go as far to say it’s priceless. 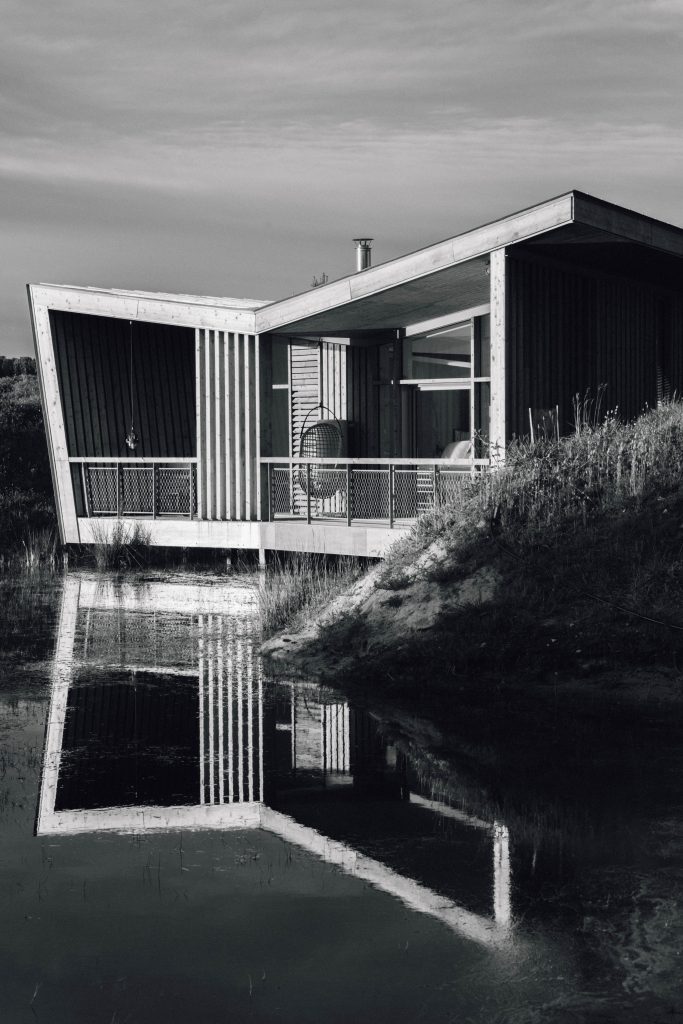