Postcards from the Billabong Pro Pipeline 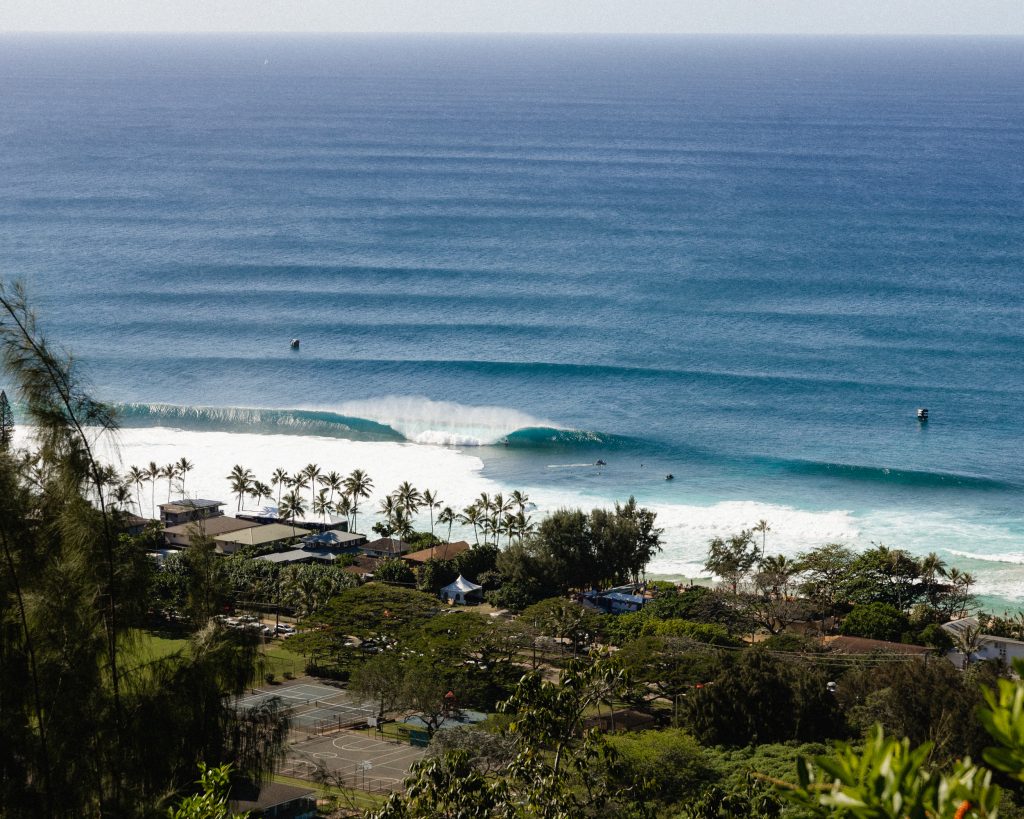 It’s been a little while on the North Shore.

Biarritz to Honolulu via 48 hours in London is a long old stretch. Made immeasurably better with a post covid points spurlge  on biz upgrades but still, no amount of points can compensate for the feeling of complete and utter of inadequacy of arriving in Hawaii with an English tan in January. It follows you around, marking you out. “Not from round here” Ghost like.

Still after 10 days on the rock and a glorious time at the Vans Triple Crown of surfing our tans are somewhat, maybe, nearly upto scratch and it’s CT time. We move from Turtle bay (highly recommend) to non other than Pat O’connells house, the aptly named Pat O’s Chateau in front of Vland – The wave of choice for any self respecting amateur surfer.

The eve of the contest is 1ft and onshore. We beach, surf midlengths and wonder if the swell is going to hit as promised.

The morning of it’s a different story, solid 8 – 10ft pipe and there’s a certain calm efficiency to the Billabong house. Once past the security (check @kanakasolutions to see the severity of what could, what might, what would happen if you f*ck up) Is it sandy feet? Is it overstaying our welcome? Are beers before midday ok in the presence of Olympic gold medallists and top seeds? We slide round the side and hit the yard with the hope of not finding out. 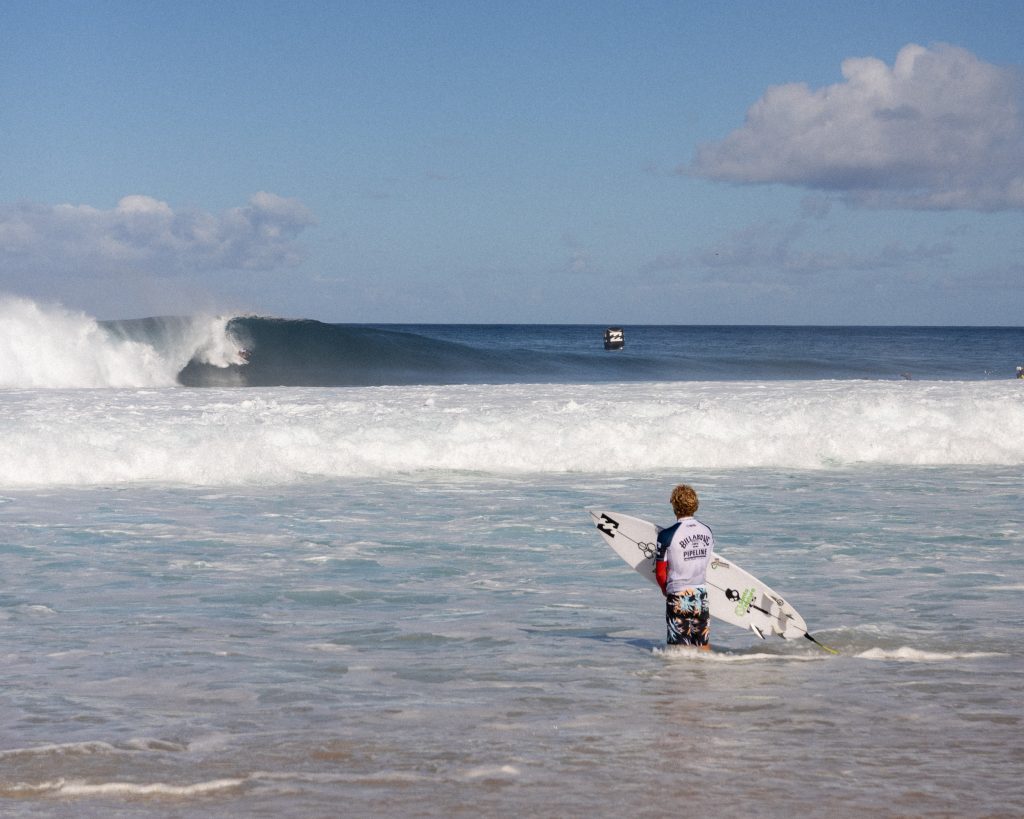 Out the front it’s proper pumping, for lack of a better word. Billabong’s crop of CT guys are drifting round, on that dual action of checking the action out the front and then running around the side for the replay on das big screen. The yard lawn is littered with Toroko’s and DHD’s. It’s of note that Italo’s prized Timmy Pattersons reside upstairs in the best room of the house, reserved for the top seed.

On the beach it’s rammed. And all going on. The most people I’ve seen in one place since el pandemico and the vibes are at an all time high. Weed vape sales are clearly through the roof and we work out the exact amount of sunscreen required as Pipe and backdoor shake the sand to the hoots of the wider public. A very surf enthusiastic crowd if we have ever seen one. 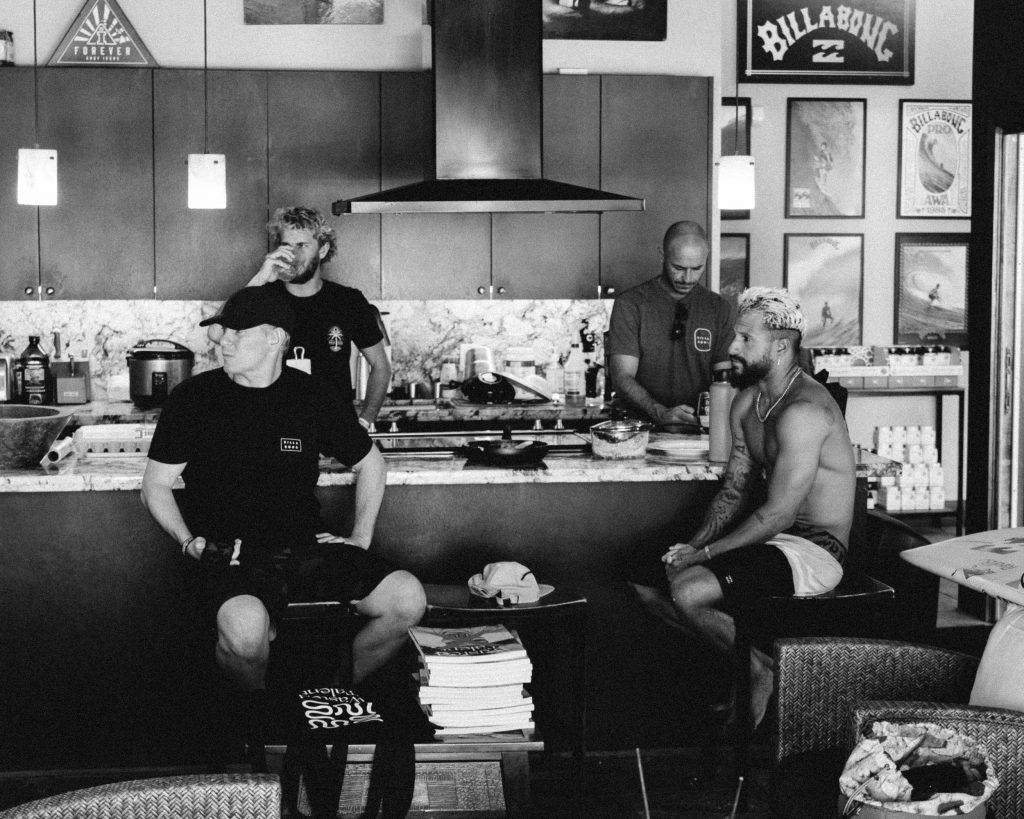 Inside the house, Digital Marketing (Digimarks!) guys run around doing their thing, their thing looks immensely complicated and despite explaining it to me numerous times I still fail to understand yet am eternally grateful for their hardwork on getting a WT x BB spot on numerous channels (hello early retirement!) and their boundless enthusiasm for our upcoming California Release party. Watch this space!

Seth Moniz gently enquires as to our photographer’s wellbeing as the immensely polite young man he is before absolutely dominating his heat with a pair of 8’s pulled from his hat. Brodi Sale and Griffin hang about whilst Fred Morais watches Kelly and Jack Robbo go head to head in conditions we’re calling ‘contestable” or as they should be called, potentially the best opening conditions to a season of competitive surfing in living memory.

Thanks to Billabong for hosting us at Pato’s Chateau this past week and stay tun-ed for are upcoming short film Fraternité and California release party. Costa Mesa. We’re coming in hot. Via Vegas…