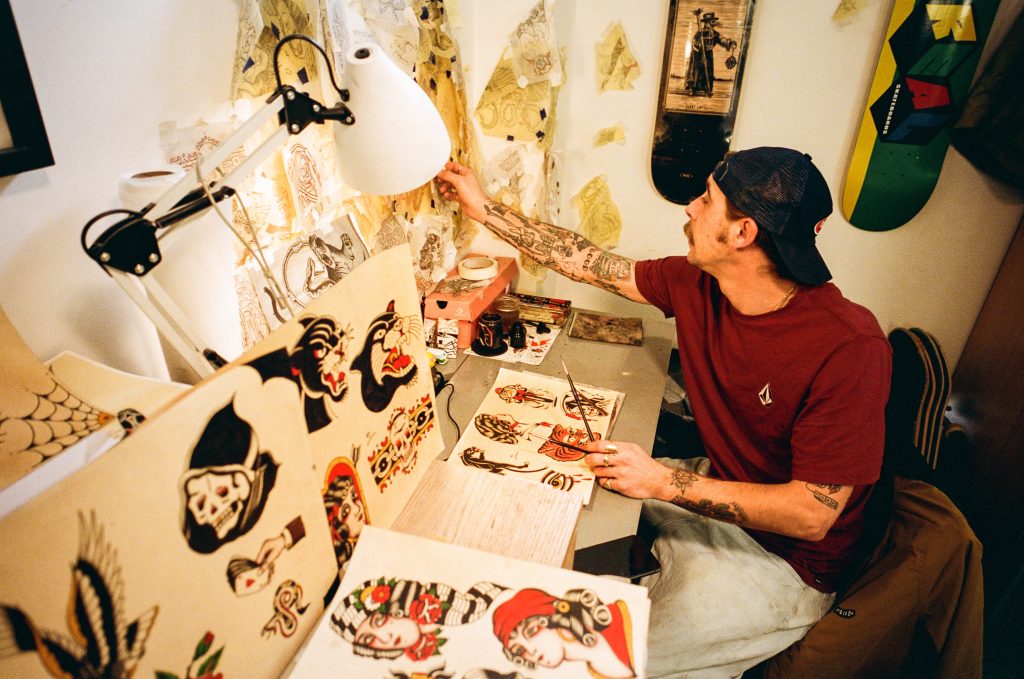 This interview was originally published in Volume X, January 2022.

What have lockdowns and travel restrictions meant for Harry? Well firstly, ‘Northern Grit’, a part we’d argue is one of his most impressive to date. With all possible getaways to sought-after EU destinations being off the cards there was certainly no sign of Milan’s marble nor the smooth pavements of Paris. Cue a part filmed entirely on the crusty ground found in the top half of England which he also calls home. Hard work pays off and this was the icing on the cake for REAL, who turned the man pro shortly after.

What else? Picking up a paintbrush for the first time and finding great pleasure in it. Thanks to both lockdown and the people he surrounds himself with at home, his newfound passion was given a chance it may not have had in normal circumstances. We’d seen snippets of his art and wanted to find out a little more…

Tell us a little bit about where you’re from and how you’ve come to call Manchester home.

I’m originally from Dartford in Kent, and I guess I ended up moving here to Manchester thanks to skateboarding. Black Sheep Store was my first sponsor and they are based here, so I would travel to Manchester a whole bunch throughout the years and one day I just ended up staying. I really liked it from the moment I started visiting. I guess my favourite thing about this place is the people and the friendliness that is here. I wish there were more skate spots though…it’s not quite London but it’s fun skating in rough northern terrain. I’ve probably been living here five years now…actually fuck, six.

Have the implications of COVID made you more active on home turf? Shooting photos, filming etc. within the UK?

One hundred percent, which has been tough in its own way. But also cool. I’ve definitely been skating in the UK a lot more which is great, but everyone knows how hard it can be to skate here and the weather’s so bad, especially in the winter. We’ll often say to one another, “Skating…?” and at the same time do the hand to mouth movement (like pretending to drink a pint) in a funny quick action…if you know what I mean haha. But I do like to skate in the winter here. You just have to pick a day and work hard. It’s been difficult at times but it’s been productive…true British skating at its finest I guess. I’ve seen a lot more people utilising the streets in England which has been nice. 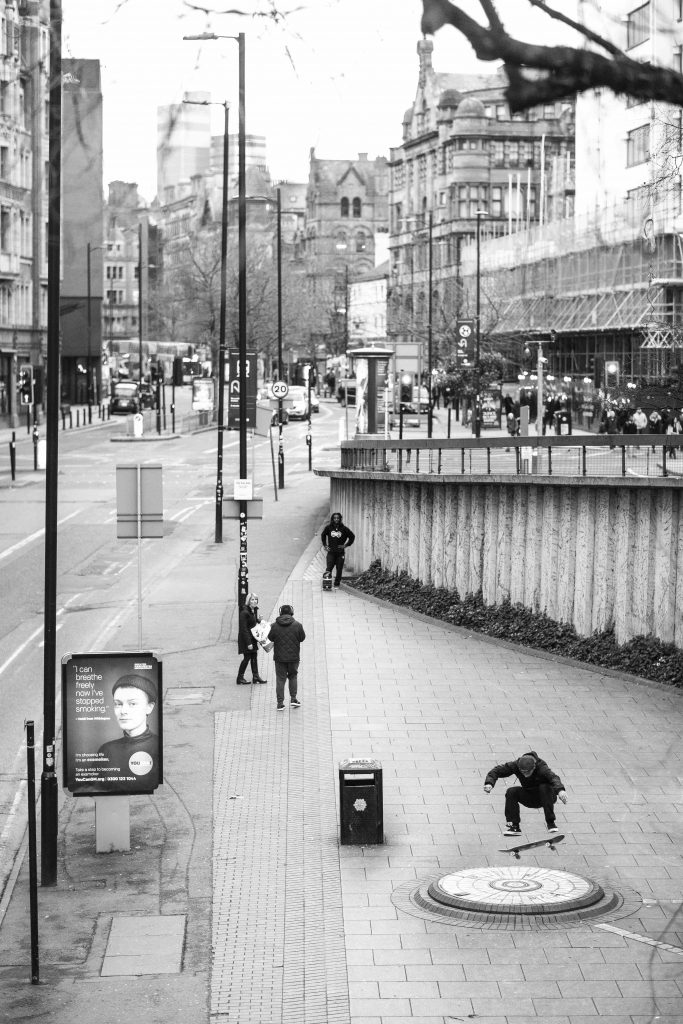 Did you have any big trips or projects which got cancelled due to COVID?

Yeah loads…I mean just the routine trips we would do were off, like heading to the US in the winter, and creating content became much harder to produce; obviously you didn’t want anyone to get sick. So yeah a bunch of stuff got cancelled, I definitely missed the guys and being on the road with them. Even the Euro trips were off…I love going on any trip in Europe, it’s one of the most fun things, but even they got cancelled. There was a lot missed out on for a while and I guess that’s where skating the UK became more of a thing.

Despite all the madness going on in the world it seems like 2021 was a crazy (good) year for you. Congratulations on turning pro for REAL a couple of months ago! Did you have any idea at all it was coming? I gather they fooled you into being filmed for Free [magazine] going through the latest issue and then the Pro ad was in there…

Thanks man! Nah I didn’t, it was pretty much a complete surprise…I did think it was weird that they were getting me to read this mag and film it haha. I was like, fuck, alright I’ll do it but I’ve been watching skating forever and don’t think I’ve ever seen footage of anyone reading through the new Free mag. My good friend Mac who’s the filmer from the US was telling me to do it, and I was thinking maybe he doesn’t realise this isn’t really a thing over here haha, but then I understood. 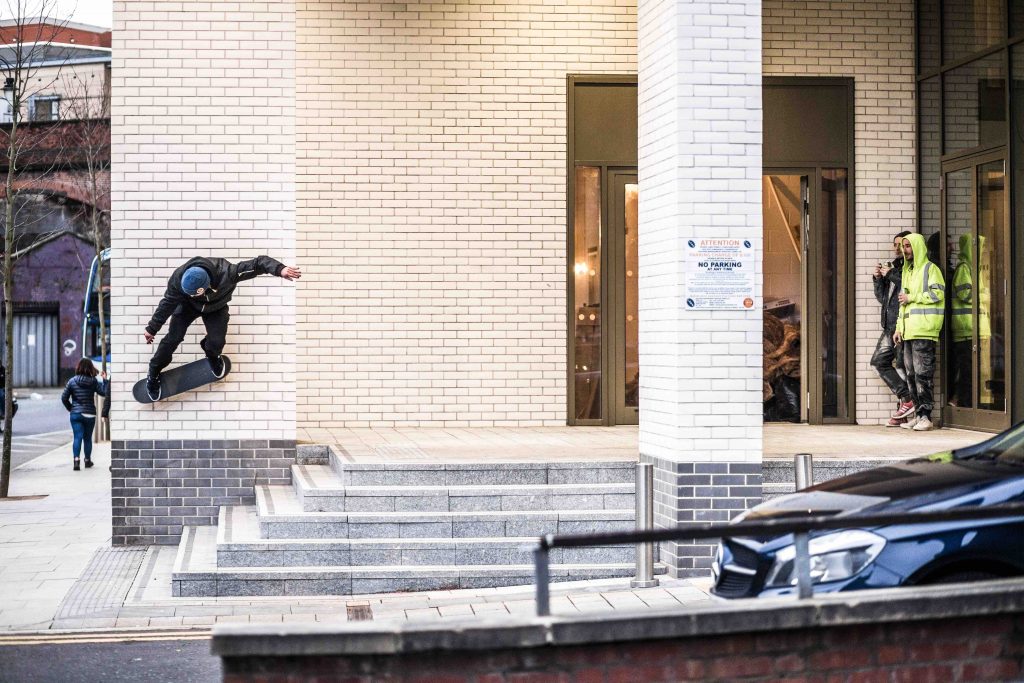 That night I actually walked my mum to the hotel mid-party; it was so nice to see her, and then I went back super nervous in case they were looking for me to say or do something in front of everyone. But it was fun, I’m so stoked it happened and that all the good homies could be there. I was super hungover the next day but Doobie (Victor) had bought some fishing rods so we went fishing and I caught some massive pikes in the Salford quays. Good times!

You dropped ‘Northern Grit’ last year…what’s in the pipeline for 2022?

I know Volcom are working on a skate and snow project that’s due to come out soon. Now COVID has eased off a bit there’s more trips back in the diary and hopefully if it stays that way we can start to get back on the road. I’ve got plans to head back over to San Francisco and skate there. I also have some art projects in the works at the moment with Volcom which I can’t talk too much about right now. And actually with REAL and Spitfire too…

Well fingers crossed, I don’t want to say anything more in case it doesn’t happen haha! I’ve got some personal art stuff too that I’m currently working towards which is fun.

Yeah we started seeing your ‘doodles’ and art pop up on your Instagram last year. When did you first start?

Probably at the start of lockdown really. Which is what everyone fucking says right? But errr…I guess that’s what, two years ago now?

Where do you find inspiration? Is there anyone specifically who inspires you?

My main inspiration would have to be Tom Wootton. He’s a really famous tattoo artist here in Manchester; we just happen to be friends through skating and I’ve always liked his art. Also some other tattoo artists who I’m close to here in Manchester like Danny Rossiter, he’s a really good dude. There’s actually a few other tattoo artists around, so all those guys taught me how to paint and taught me some of the techniques. I’ve just been practising loads and didn’t expect anyone to notice that much. It’s just my art, so for me it just looks like scribbles but I’m really excited that people are stoked on it.

Talk us through the mediums you’re using…

I’m painting in the traditional tattoo style, which is called spit shading. It’s with Indian ink and coloured acrylics…it’s a technique of applying the ink and adding shading through, basically, licking a clean brush and blurring the edges of a line. It’s sounds weird I know but you’re not eating paint trust me, haha. So it’s a combination of things. but there’s loads of different techniques which I’m learning all about now. To be honest, I’m not too much of an expert on it all, I’m learning as I go. 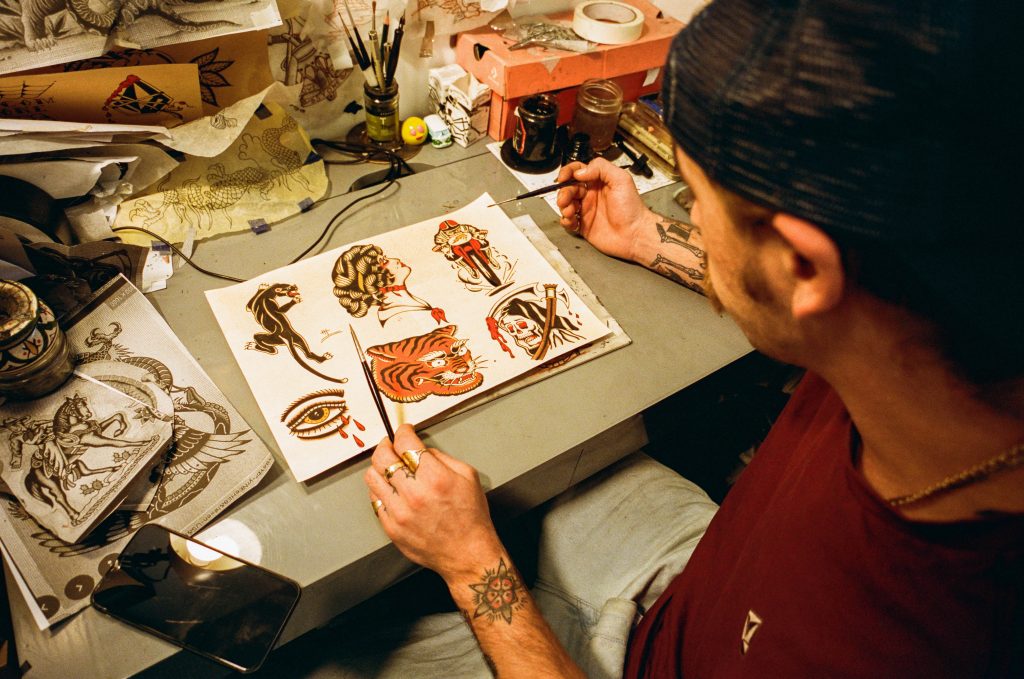 Do you have any favourite drawings? Any that you’ve done that have stood out to you?

There is some that I really liked for ages and then there’s some which have grown on me. At first I would be like, fuck I hate it, then over time it’s grown on me. Some of my favourites would have to be a dragon I did recently…there’s also a couple of flash sheets. Right now I’m doing one I’m really, really stoked on. It’s like a tiger head in colour…I’m trying to do a big ol’ orange tiger head and I’m trying not to fuck it up, haha.

Are you doing any tattoo stuff yourself or just sticking to illustration for now ?

I am getting into it and I have a machine. I’ve actually been practising on my own legs and I have some fake skin, but it’s kind of shit…I’d love to move on from illustrations to tattooing one day but right now I’m mainly focusing on the paintings and the designs. 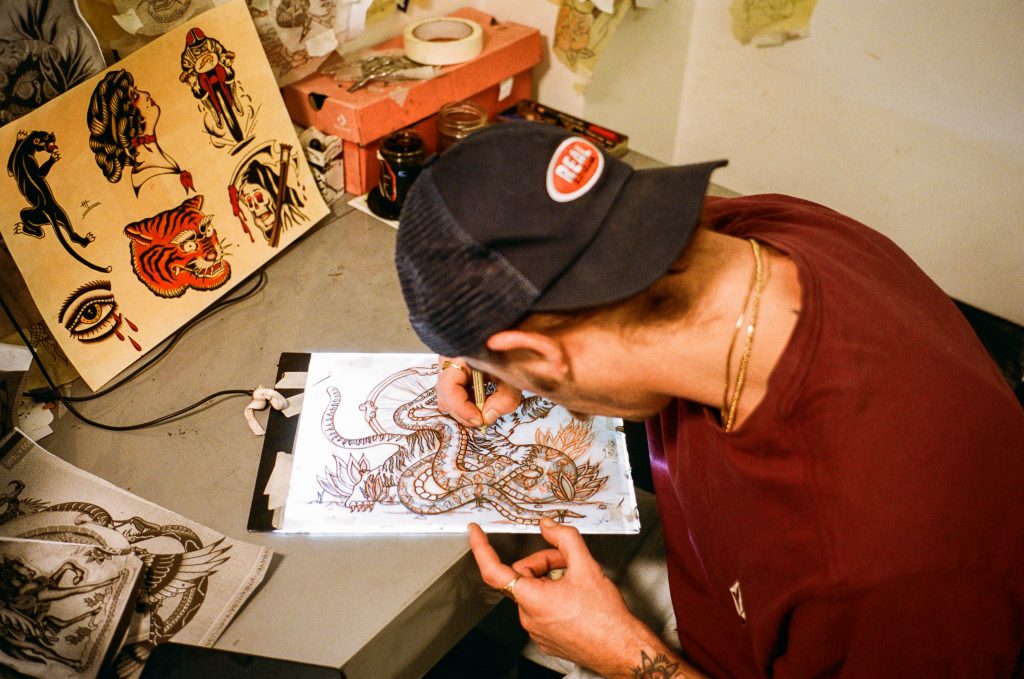 Have any of your friends asked for tattoos of your artwork?

Yeah, I’ve actually done a reaper design for Herman Stein recently who’s getting it tattooed in Norway by one of the dudes at Blue Arms tattoos, which is cool. And then a friend of mine had asked me for a swallow with a dagger through it; I was sober when I did it but it didn’t come out too good haha. It was my first tattoo experience. Full design and stencil. I need to chase him down actually and see how it looks…and how it healed.

How are you balancing your time between art stuff and skating? I’m guessing it works quite well, getting rained out in the UK all the time must give you lots of time for art…

It can actually be nice to take the time off from skating sometimes, but yeah in the summer I’m skating a lot more as it’s the best time and the art kind of gets put aside a bit. I’ll try to paint in the mornings. Like 9-11ish, and then get my day going and get skating. In winter it’s skating first then painting after…because of the light.

We look forward to seeing where this new interest takes you…you’re certainly off to a really strong start! Any last words? 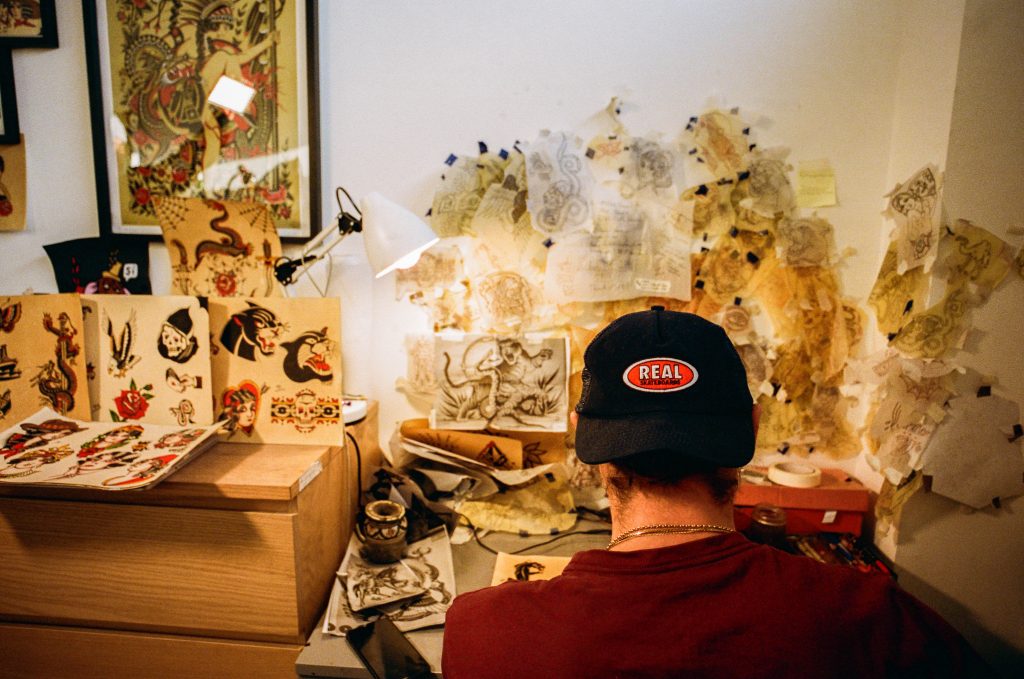