Skip to main content
Close Search
Back to Originals Next post: Not Here By Luck: Julie Betrix 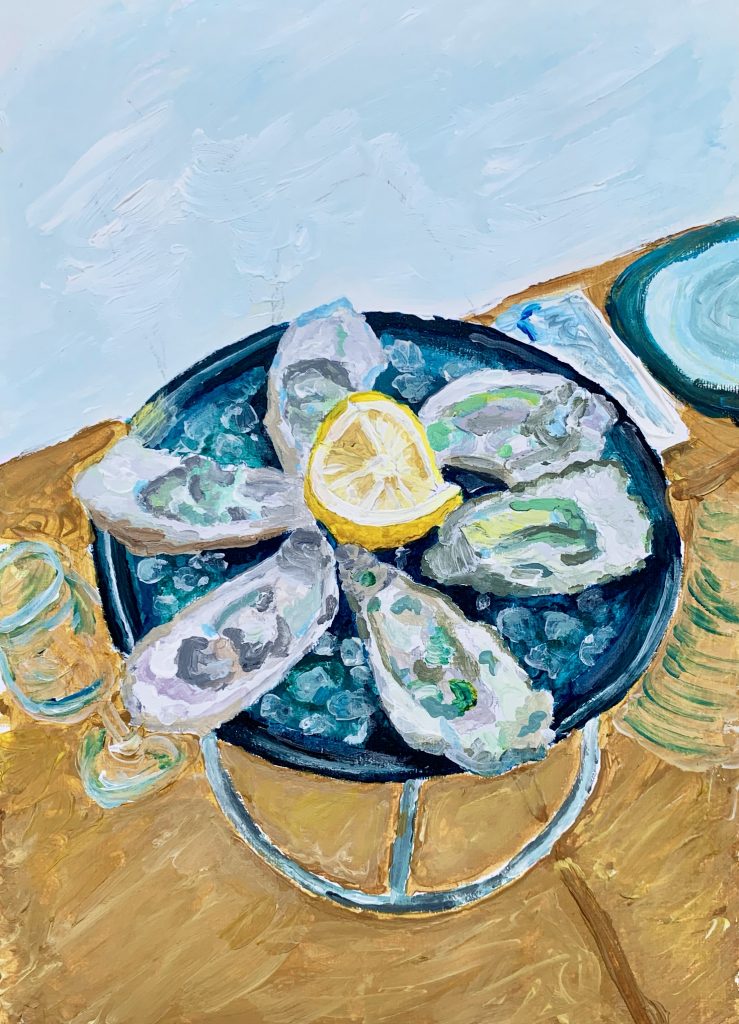 This article was originally published in Volume X, January 2022.

Being friends with the editorial team of this magazine means you’ve probably been dragged to the lake in Hossegor at least once in your life. Enter a late afternoon on a hot summer’s day, sitting at one of the cabins with a dozen oysters, the same amount of bottles of white and most likely two packs of cigs. Well, I certainly have…

Louis XV: Member of the Club

Before the beginning of XVIII, native oysters were commonly found along the Atlantic coast. Unfortunately, their population declined by 95% as trade across Europe increased drastically between the XVIII and the XIX century.

Louis XV was a huge oyster fan, and it was common for him to have a few dozen at the table as a snack. Classic. Due to an overconsumption of oysters during his reign, in 1759, he forbade their consumption between 1st of April and 31st of October, during their reproduction time. Another reason for forbidding their consumption then was the increased risk of them  turning bad during transportation in hotter months. Even with this regulation in place, the   oyster population declined year after year after year. Nowadays, the only way to find healthy and tasty oysters is through aquaculture.

A natural Oyster is what is referred to as a Diploid, which means it has two complete sets of chromosome (20 in total). With the greediness of the industry and its overconsumption, oysters have since been genetically modified to become Triploids, featuring three sets of chromosomes, which often makes them infertile, or unable to reproduce. However, it also results in a speeding up of growth and means no milky taste during the summer time. It’s the  perfect way to push the consumption year round, instead of respecting a natural process with a reproduction cycle, which is pretty fucked up. In addition, there are no regulations in the industry ordering producers to indicate the origin of oysters and whether they’re genetically modified or not. Recently, however, associations promoting unmodified, or ‘natural’ oysters are taking a stand, with a few labels such as “Ostreiculteur Traditionnel” here to help us in this mess.

There are two main types of oysters harvested and displayed in markets in France:

Giga Oysters, also known as Pacific Oysters, have become the oyster of choice for cultivation in many regions across the world. Originally from Japan, where they have been grown for centuries, Gigas were introduced in France in 1966, to replace the Portuguese Oysters, whose population was in decline due to illness and overconsumption.

The European Flat Oyster, also known as Belon, is the second main type of oyster you’ll find. A bit smaller with a round shell, they are mainly grown in Brittany. They have a bit more of a sharp, mineral taste with a meaty texture.

Personally, I’m a fan of Giga Oysters; they have a better texture and present stronger flavours.

When buying oysters, you’ll always be asked which size you’d like. They are classified from 0 to 5 for Giga and from 000 to 6 for Flat Oysters, 0 being the biggest oyster size and 5 the smallest.

The bigger the oysters, the more textured and fleshy they will be. If you struggle slurping oysters, and if you recently joined the club, I recommend you select smaller oysters—go for caliber 3, 4 or 5 (for Gigas).

With all of the above, you’ll now be able to select the oysters that suit you best—all you need  now is a few tricks on how to shuck an oyster whilst avoiding a visit to the hospital.

How to eat an oyster

I personally love raw oysters. Some people love poaching them and cooking them, but I am not particularly fond of it. The reason I like oysters raw is for their full mineral taste, the seaweed and marine flavours, which you lose when heating them.

Like most things, just make the effort to source the best quality produce and you won’t need to do much. My favourite combo when eating oysters is probably also the simplest: oyster, bread and butter, and white wine. Very simple but just perfect. Follow this same order when eating.

The other way to eat oysters, according to me anyway, is to pair with a nice condiment—all together in the shell, and slurp it. I always try to balance the saltiness of the oyster with something acidic (vinegar, citrus juice, pickles, etc.) and fatty (cold pressed olive oil, flavoured oil, beurre blanc, brown butter, etc.) Adding some shallots makes this +++ delicious.

The cool part is that there are so many options that it’s hard to choose just one combo in particular. Most importantly, just remember the balance and slurp it!

The best time to eat oysters is roughly between October and March, as they start their reproduction phase from April. From then, they become ‘milky’ and they can lose their flavour.