From the World August 10, 2022
By Robin PaillerNo Comments 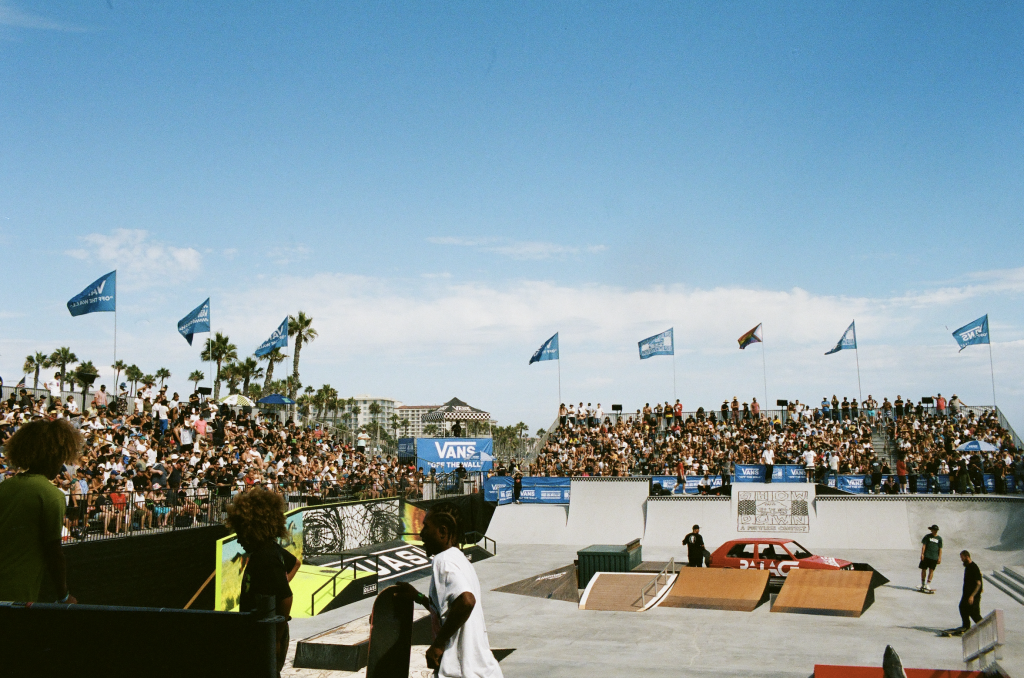 The CT is boring. The waves are really good and yes the surfing is amazing but it reeks of exclusivity and to a certain extent, could we dare to add complacency? 32 very well behaved surfers and role models.

The QS (RIP) nay, challenger series is real. It’s tenacious. It’s tentative. Gritty. Raw. It’s teeting on the brink of acceptability and sustainability in everyway possible. The surfers want it more. It counts more. The stakes are real. Quite simply, if you’re on the CT, you’ve (most likely) already made it – career wise. This is by default, boring. If you’re on the QS /CS, you are (most likely) struggling and every dollar of prize money counts. The hunger is real. It’s not all sunshine and rainbows. It’s called the grind for a reason and we love it so.

The underdogs! The upsets! The school of no training! The small town heroes! The passion! The nonchalance! The not making your money back on flights on a round 1 knockout and having enough for a house deposit for a win! Those who surf sublimely well but also love to send it and turn up red eyed to heats and for that we salute you!

Enter the US Open! 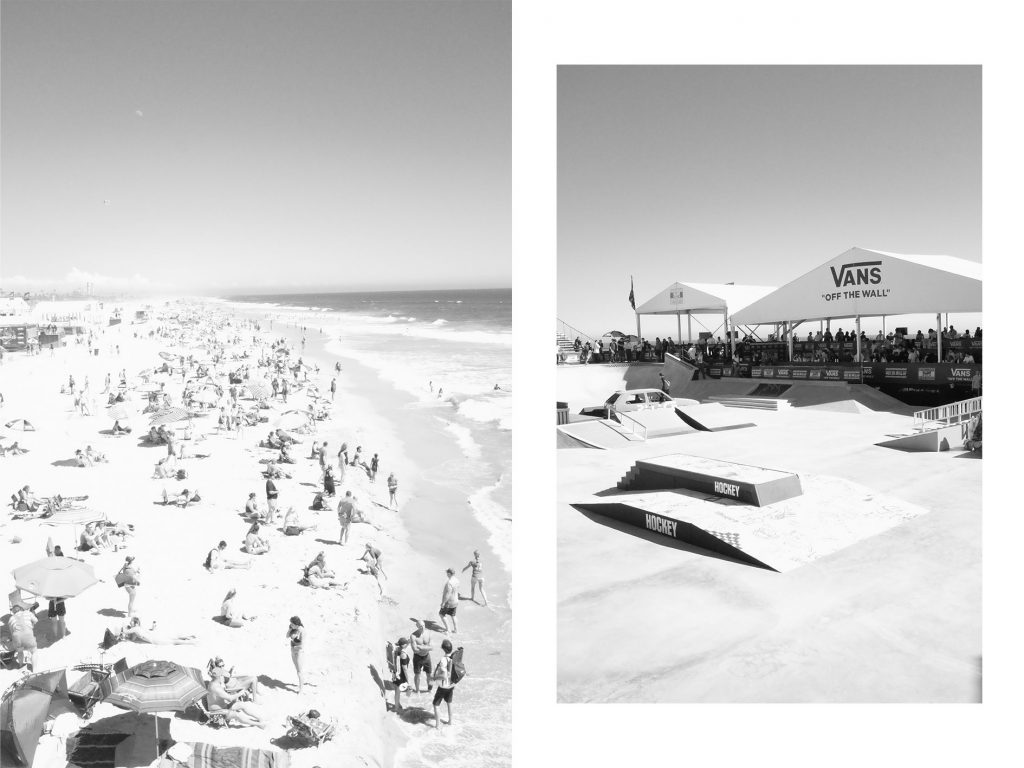 Some faces change but most are the same. A tiered global series of sub par nightclubs intermixed in daylight hours with a dashing of waves. This week’s edition is hosted by good old ‘HB’ aka Huntington Beach. A fascinating, curious place where the rabbit hole is somewhat infinite.

We couldn’t think of a better place for a lil midsummer break. 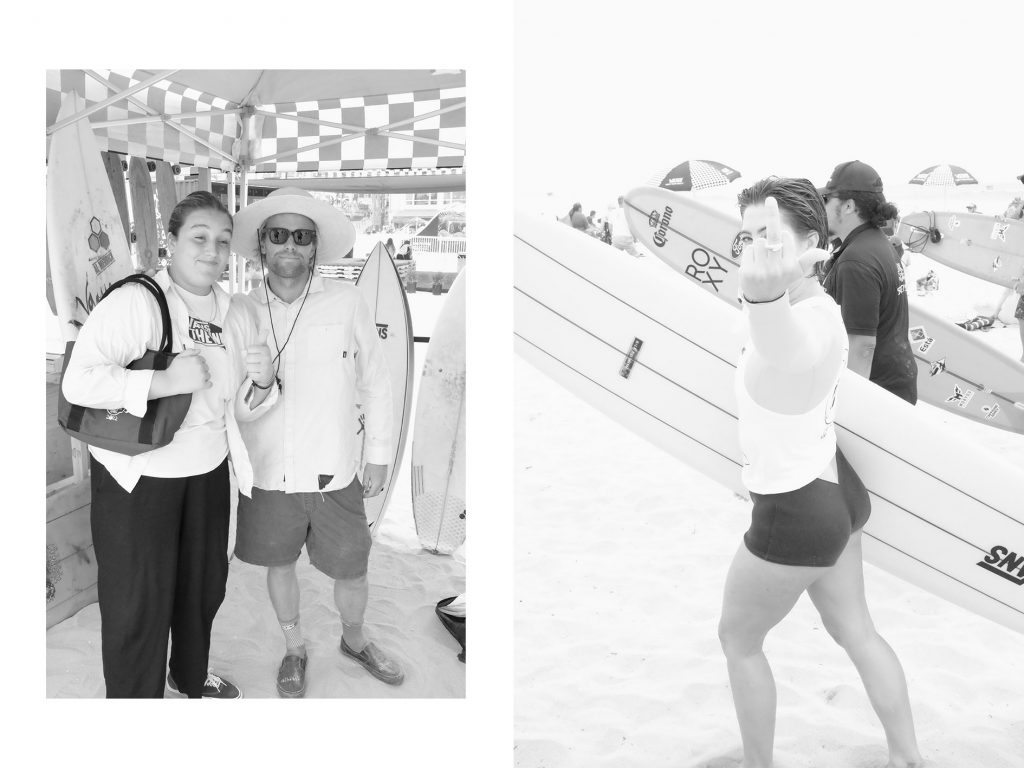 It’s good to be back. Our arrival was greeted by ‘the best 3 days of surf in Southern California this year” as gushed to me, numerous times over spicy margs. Sadly, with our boards still in Salt Lake City and a penchant for spicy margs we couldn’t really care – plus, there was important surf journalism to do!

Now if unless you’ve been living under a rock over the past 6 months. You’ll know that das inflation is biting big time and yes, coupled with the strongest dollar vs every other currency in the world it’s possibly the worst time ever to be foreign in america. With a club sandwich coming in at 31€, a dangerous time to be a surf journalist or duct tape surfer. ”Vans paid my parking” Nate Fletcher, one of my favourite people ever growls at me as I babysit his kids by the pool “So hopefully I can afford some food” . Jimmy Wilson chimes in, having not missed a US open since 2005 – webbed gloves on poolside ‘If you get the chance for a free meal at the US Open, you fucking take it” which as a seasoned pro I heed his advice. 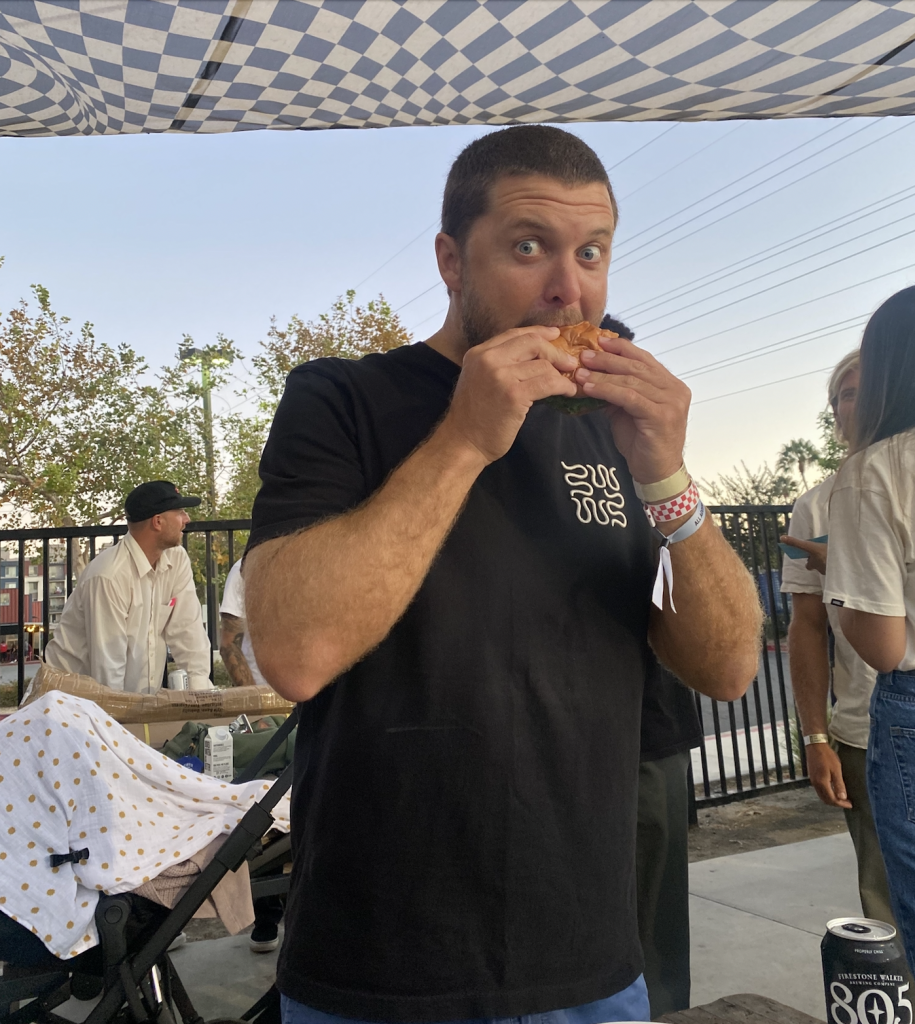 Hotel rooms are a valuable commodity and a source of much after parties. We’re happy to reliably inform you that a twin sized queen room at the Pasea hotel can welcome 30 plus young peeps for an after party (complete with smoking terrace) and then quite comfortably sleep 8. Noise complaints normally start somewhere between 9pm and end when the sun starts to rise. The lobby is quite frankly a terrifying place with the entire world there and with anxiety hangover levels peaking, a place we try and spend as little time as possible. 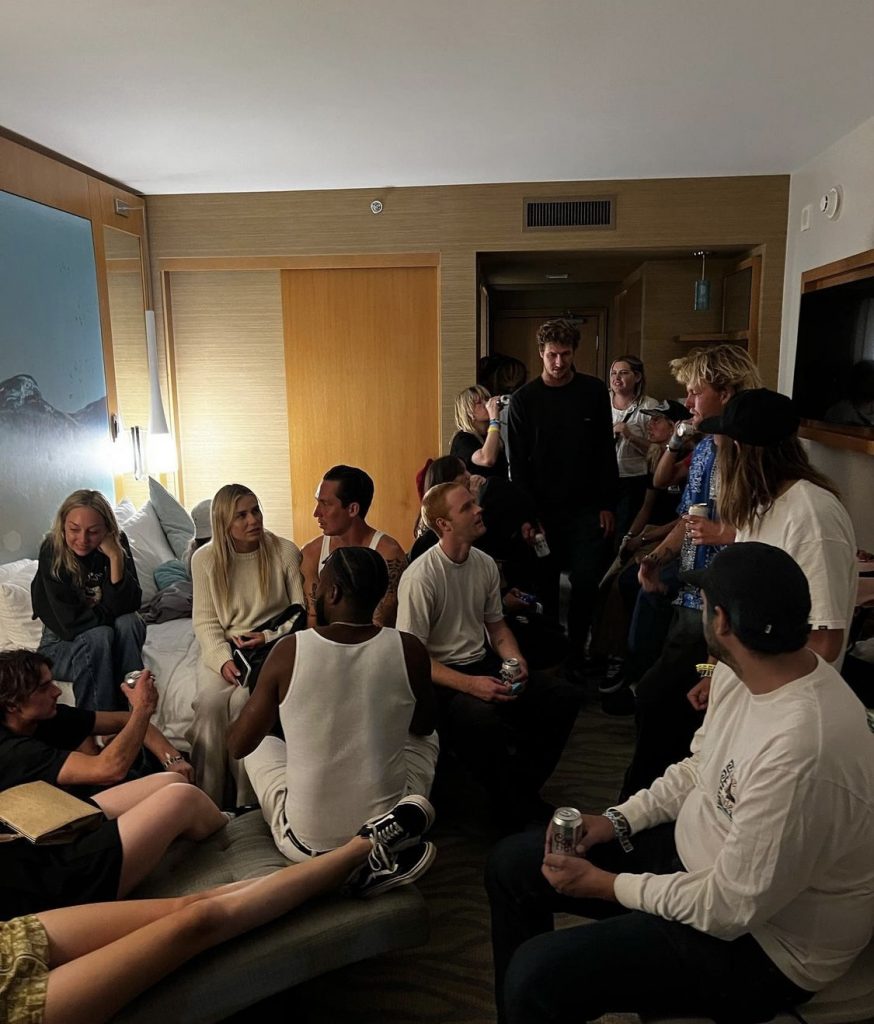 To the event site!

Source of free lunches, waters (the morning) and beers! Yes, free beers at a WSL sanctioned event. It’s been a long time coming. Has my personal crusade pulled off? Think so! The Vans US open is in a word, massive. Such blue chequerboards! A surf village, shaping bays, a world class skate park constructed on sand then tents as far as the eye can see. Competitors’ area – Exclusive! Vans Surf VIP – Families! Media tent – Actual conscientious work! 805 Tent – Safe zone, free beer! We find the best free lunch is in the skate VIP, where as in the 805 tent (for the properly chill) the beers start to flow freely at 11. As a employee of a major surf brand and advertiser with WT tells me. “There’s only one thing darker than drinking at the 805 tent alone, and that’s drinking so much you forget your laptop here” 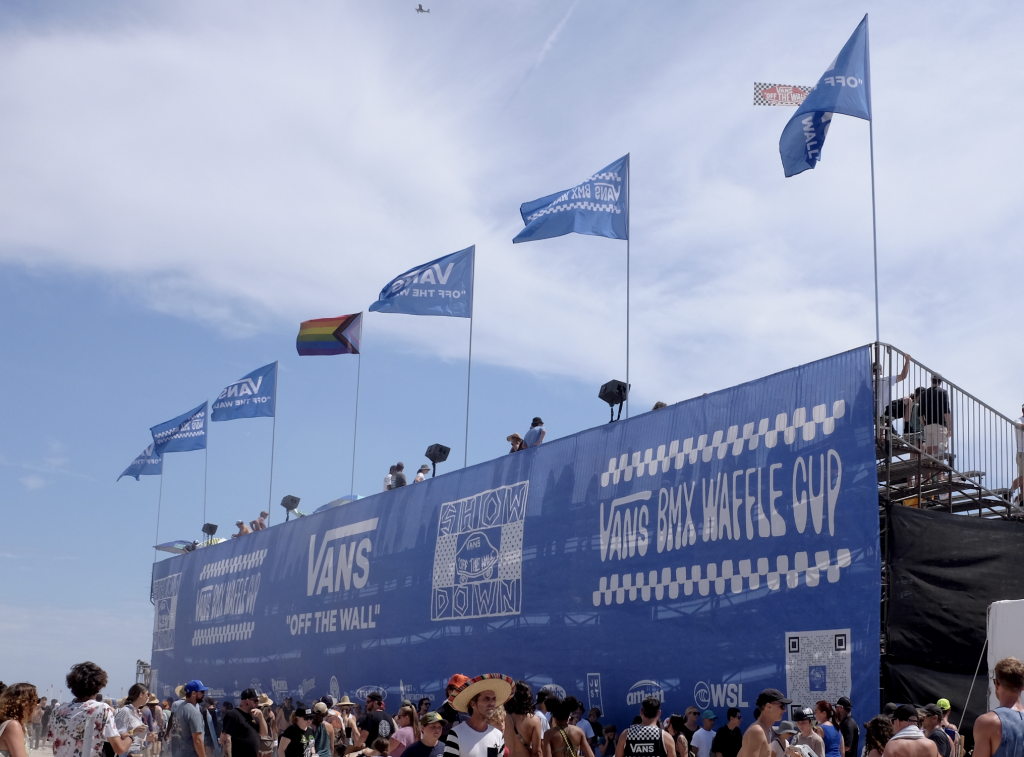 Now, a crucial part of the US Open is wristbands. It’s important to wear a minimum of at least 78 at all times, preferably all the way to the shoulder. We’d recommend, Vans VIP, Skate VIP, Athlete +1, 805 tent entry, 21+ Verified (crucial for those icy beers) and Media band just for starters. When you have collected enough wristbands and been shouted at for then wearing the wrong one “Not that one sweetie! Step aside!” you may then have an elevated view of the waves. It’s a strange wave at best. Consisting of a peak (sort of) where the left is better but runs into a pier after 1, maybe 2 turns. It’s then time for what feels like 20 mins of hopping and s turning to hit a pretty horrific end section, set to the tune of the eternally optimistic WSL commentators of ‘getting the score’. 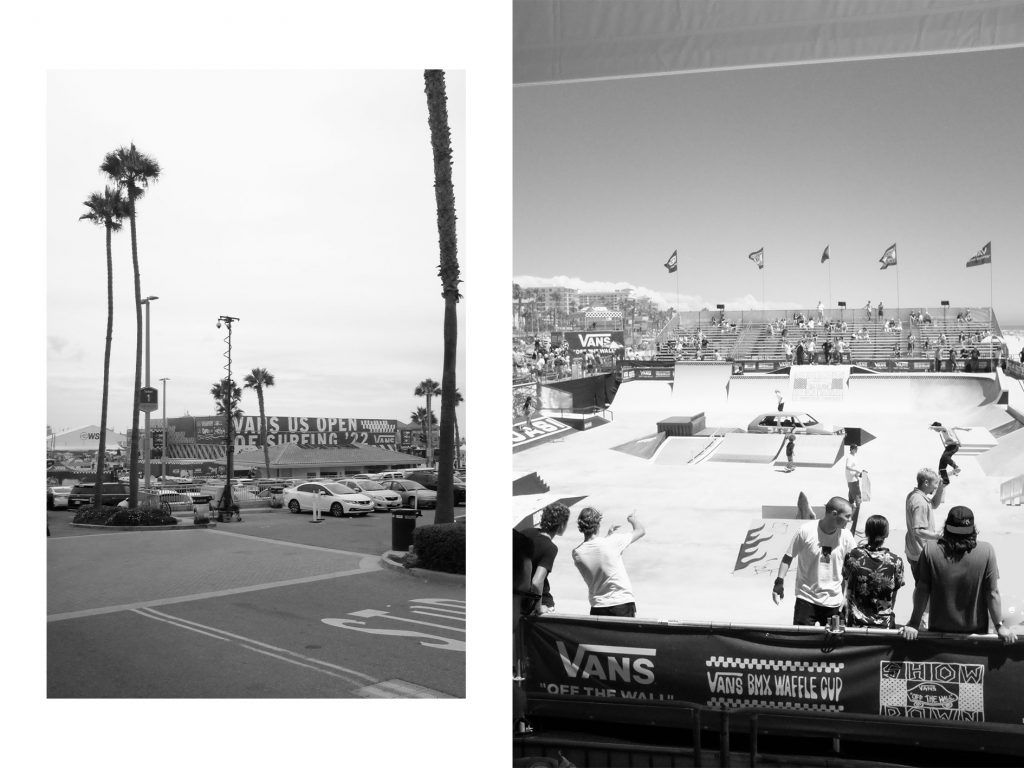 This year’s Vans US Open of surfing saw the inclusion of the Duct Tape. A contest, series of the best times and vibes going on a worldwide scale. Japan, New York, and most recently Cape Town. Now HB isn’t really adjusted to longboarding in the trad sense of the word, read leashless. Combined with 4ft sets and a fuck off massive pier with its pilings makes for quite stressful viewing. It’s a festival of broken boards. Victoria Vergara’s board breaks in her incredibly well manicured hands whilst Jules Lepecheux’s take a ride through the pier and ends up totally trashed.  A tough time to be a French surfer in HB. It’s a mixed bunch of surfers with a WSL flavour thrown in the mix but Harrison Roach and Tosh Tudor stole the show for us. 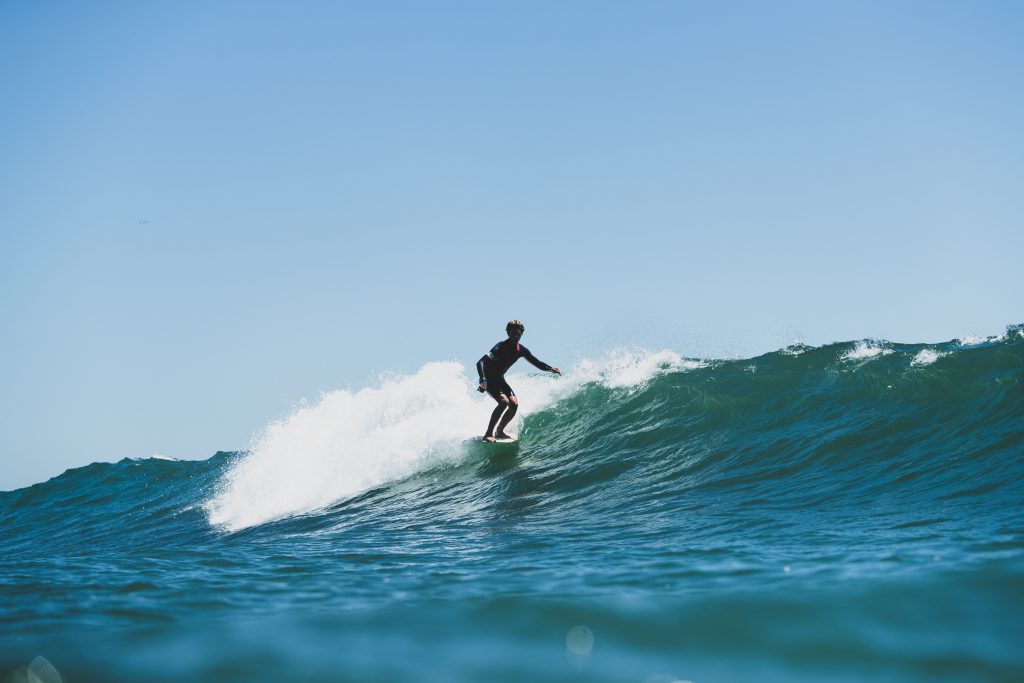 Despite the name, The US Open of Surfing also takes their BMX and skateboarding very seriously and as dabblers in the latter with a love of lunch we spent some quality time there. The park course is always nothing short of incredible and this year was no exception. Bare in mind it’s 1) Temporary 2) Built on a beach. Sections and obstacles were divided by collaborations with some skateboarding’s most ‘aligned’ brands. The likes of quasi, spitfire and a centre piece à la Palace – an original 90’s VW Golf which as Charlie Birch nicely put, was ‘proper mint’. Reactions to Charlie Birch’s accent in Huntington Beach are worthy of prime time TV. The two main things we took away from the weekend? Mark Appleyard showed up for about 30 minutes to nonchalantly three sixty flip said car as he liked the look of it before fleeing, and that Ronnie Sandoval shut the thing down on finals day with a transfer to 50-50 which can only be described as f*****. 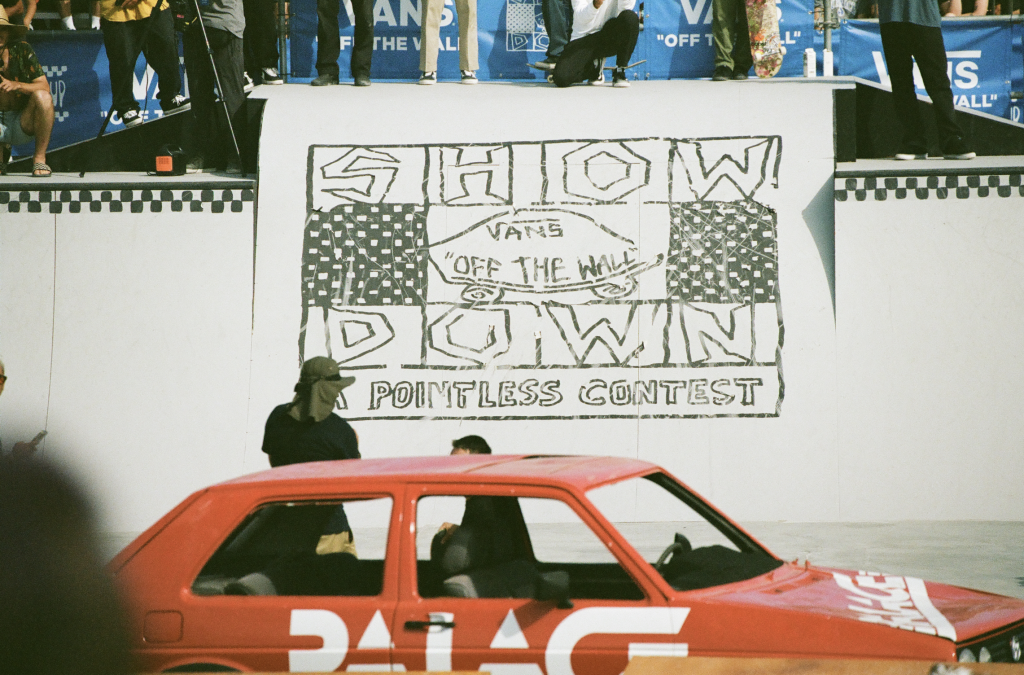 But now, to the soirées! Vans as usual threw out the red carpet event wise, Kicking off with a welcome dinner, we were happy to see friends new and old and tip our toes into the joys of Huntington main street, where we were asked if London and England were the same thing, and then told how great it must be to be an Australian. From there it was into, something I don’t really remember afterwards at the Wayfarer (blame Jetlag!) but yes there was surfing and music.

The crowning moment being the Ch 11 premier at the Vans HQ. With the rowdiest of shuttle buses. Dane and Hunter’s latest creation really blew the crowd away with the most mental surfing we’ve seen in a long time with a ton of our favourite surfers. This was followed by Skegss forming the biggest mosh pit held at any surf event I’ve ever seen. 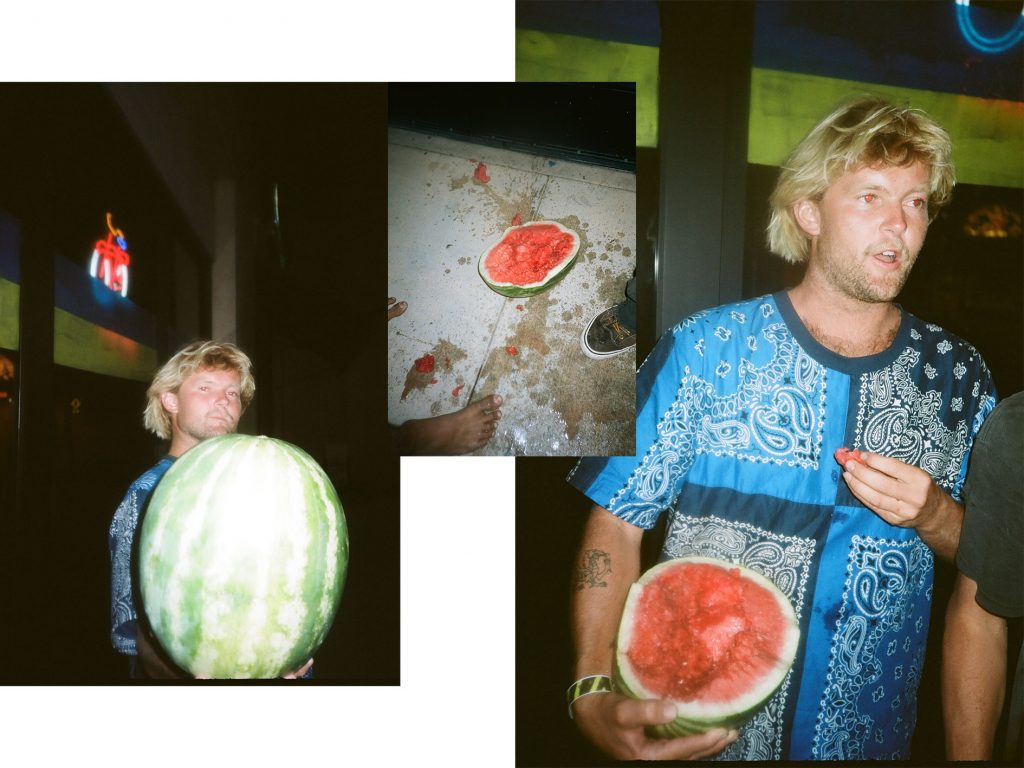 What makes the US open is the personalities and who better to champion than Eithan Osborne. Having landed a monster air, we find Eithan shot gunning beers in ‘da club’ whilst he’s still in the event. As a surfer that could legit qualify that’s  the exact energy that the tour needs and one that we condone and embrace wholeheartedly. I asked him his thoughts, “I mean I only need a couple of 9th places and it could be in. I would be so much fun” He pauses and thinks “I could do with the money” With a semi final calling in the morning, and at night the Chapter 11 premier he’s been told by Dane and the CH11 crew he’s to be on best behaviour “I’m allowing myself 3 beers” he confides at me. Eithan sadly is knocked out the next morning by the eventual event winner Zeke Lau of Walvis bay fame. We celebrate – “I want to yell, I haven’t yelled all week!” as we pop bottles at the home of all things HB kinda sendy. The Bunaglow.

Another stand out was Holly Wawn. When Holly calls, you answer. Usually with the greeting “What ya upto C*nt” . Then you are usually roped into multiple margaritas before stepping foot out of the hotel, followed by any other bar where Holly will be no doubt holding court with the best form we’ve ever witnessed. I have vague memories of Harry Bryant being kicked out of Hooters and reappearing with a watermelon. Vincent Milou won a grand in the skating and celebrated by arriving to LAX, changing his flight, Uber-ing back to HB and sleeping on the floor of the WT room. We’ve learnt that Julian Wilson really likes fireball and that the women’s surfers of the US open go waaay harder than the boys. 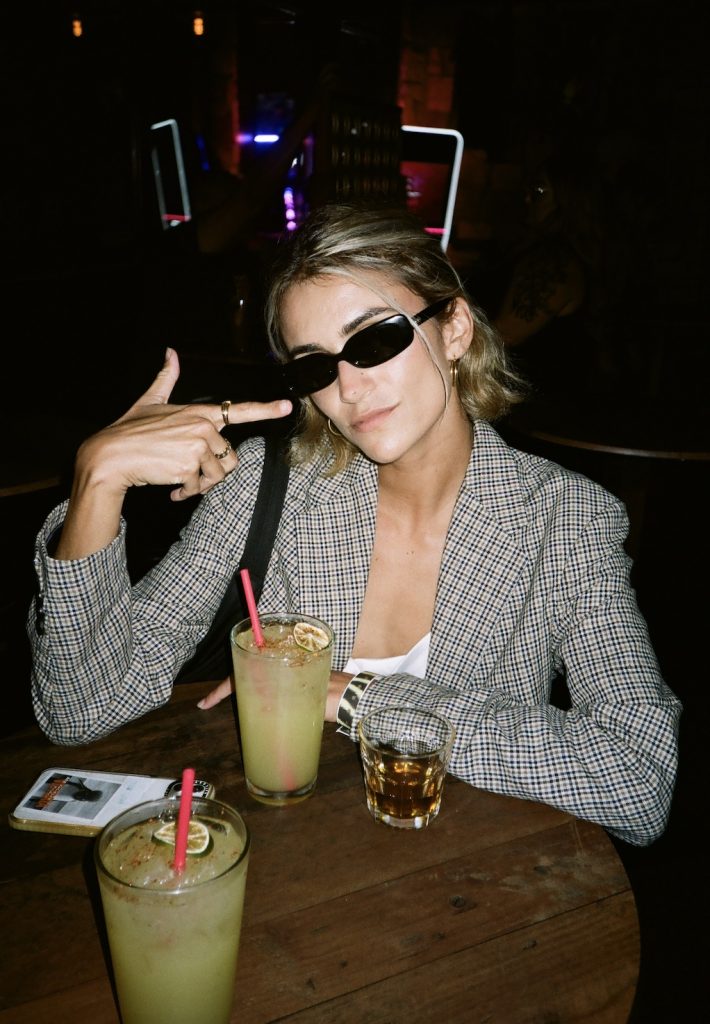 It’s been a long, weird old week, and having penned this in a hotel room in Tijuana having arrived here in a tunnel. It’s only getting weirder. We’re going off the grid for a little while before dual premiers and events in LA and France, we might give our livers a little break. But probably not.