Skip to main content
Close Search
Back to From the World Next post: Film Club 27 – Summer Richley

From the World August 15, 2022
By Robin PaillerNo Comments 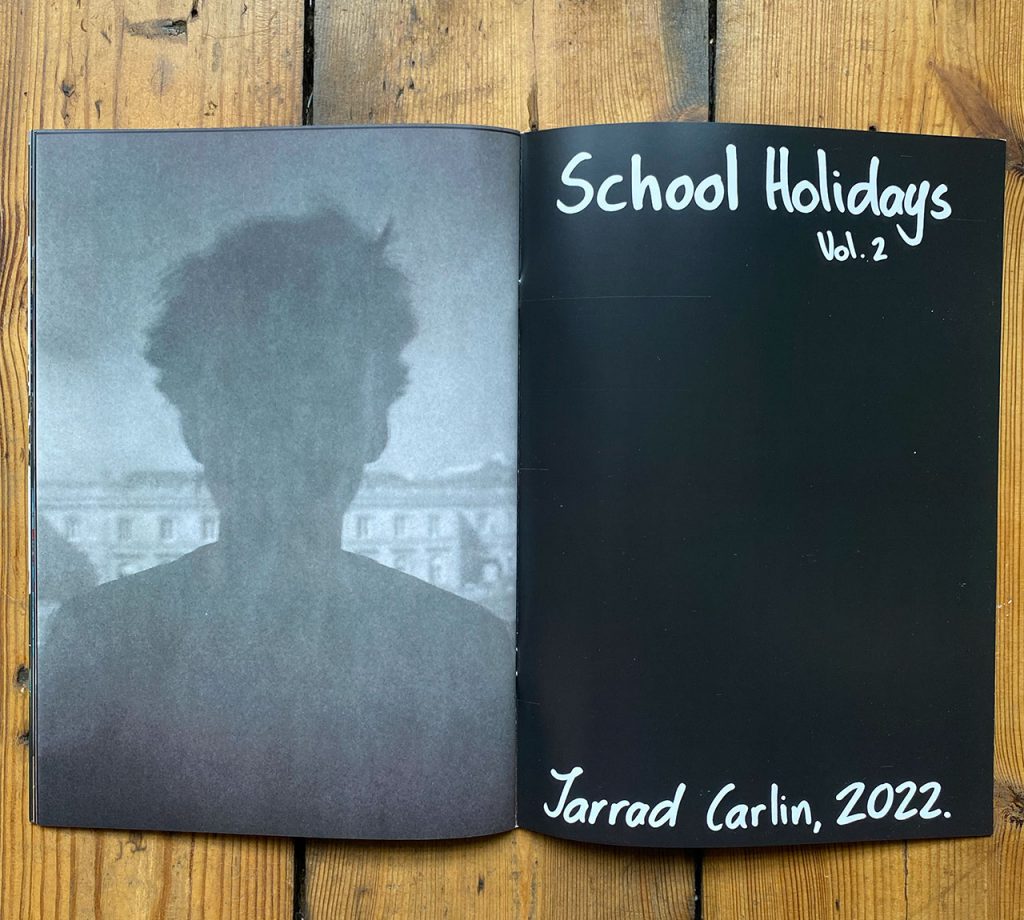 If you’re not familiar with Jarrad Carlin, then you should be.

He’s one of the those annoying dudes who’s talented at everything he does.

Having grown up in Tauranga, New Zealand, Jarrad had a stint in Melbourne before switching up hemispheres to  London, England. It’s a move that’s paid dividends it seems, allowing both his skateboarding and photography to flourish simultaneously.

So with the release of his latest zine School Holidays Vol. 2, which you can cop here, we figured we’d take the opportunity to have a chat.

*We should probably also mention that he’s not really annoying. In fact, he’s one of the nicest humans you’ll meet. 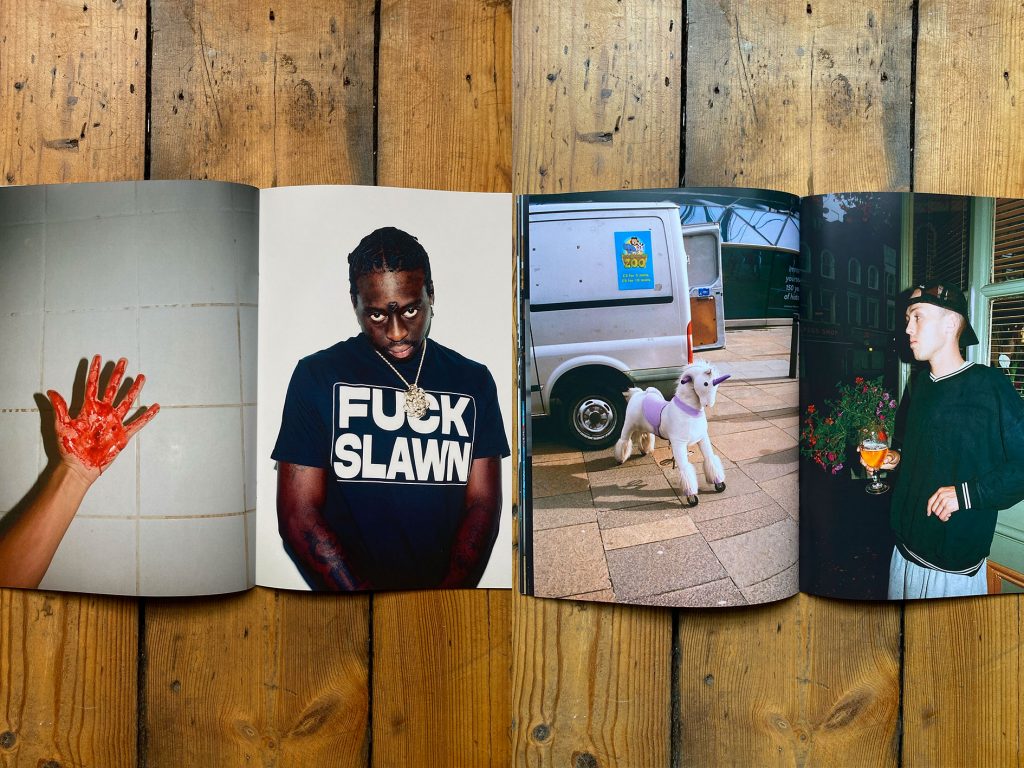 What’s the story behind the name for your new zine, School Holidays Vol. 2?

The joke of school holidays comes from my time living in Melbourne where the older skaters used to joke about us living like permanent school holidays, which I think still applies to a lot of Skaters, surfers and other creatives. It makes me laugh some of the situations and places I find myself in through skating. I want to keep living this way as long as possible.

Would we be right in saying the imagery is mostly a documentation of the places you’ve been and the people you’ve met along the way through skateboarding since you’ve been living in Europe?

Exactly, the term represents the weird things you get up to and places you find yourself in when you’re not running on a schedule. I love the way of travelling on skate trips so much, you end up in really nice places but never do anything touristy. Usually being guided around by a local who really knows their way around the city, so you end up going to the good food places, places to chill where no tourists know about. 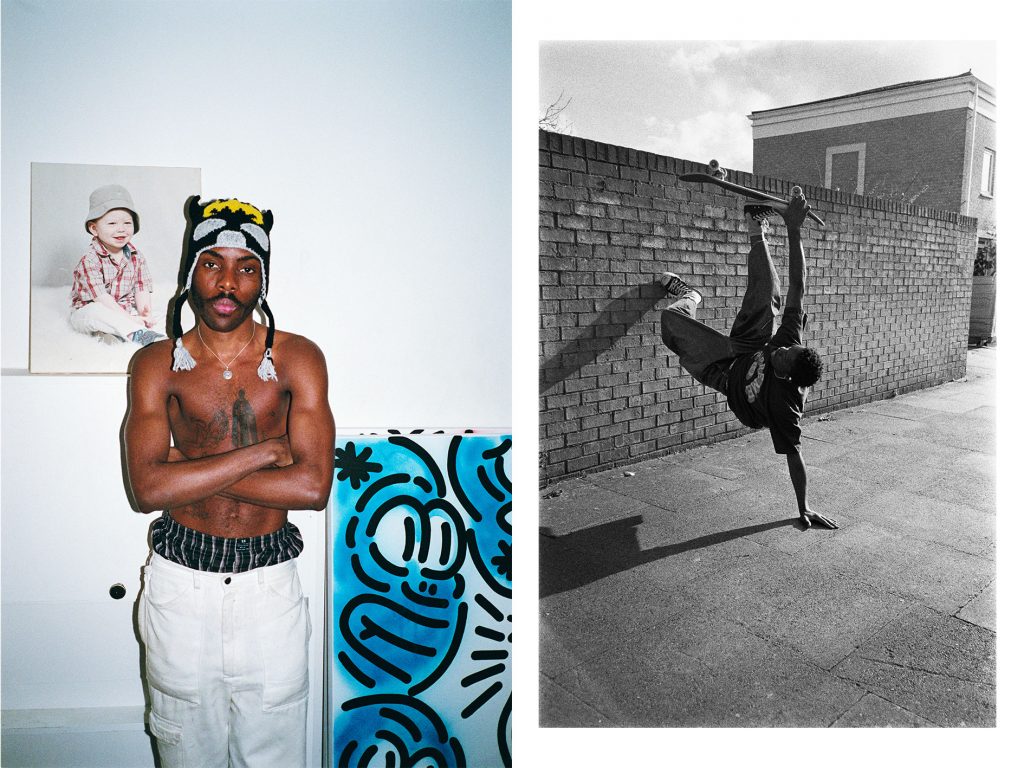 There’s numerous ‘Always Do What You Should Do’ hits in there, what’s your connection with the brand?

I moved to London 4 years ago with my 2 best friends from home in New Zealand. We ended up sharing a room, 3 of us in one room, now known as “the room”. That is where Nick started always and myself and Mackenzie ended up just helping wherever we could. As its started to grow there has been a lot more areas to help and new things to learn. We are still just taking it one step at a time.

You left the southern hemisphere just before the whole COVID thing and never left. Are you feeling right at home in England?

I honestly feel so lucky to have been here during covid, speaking to my mum and friends in NZ it seemed like the lockdowns and restrictions were never ending. Obviously England handled everything terribly but it was actually quite manageable to still skate during the lockdowns, and towards the end get away to certain places in Europe. I’m excited to get back to Nz and Australia later this year for summer. 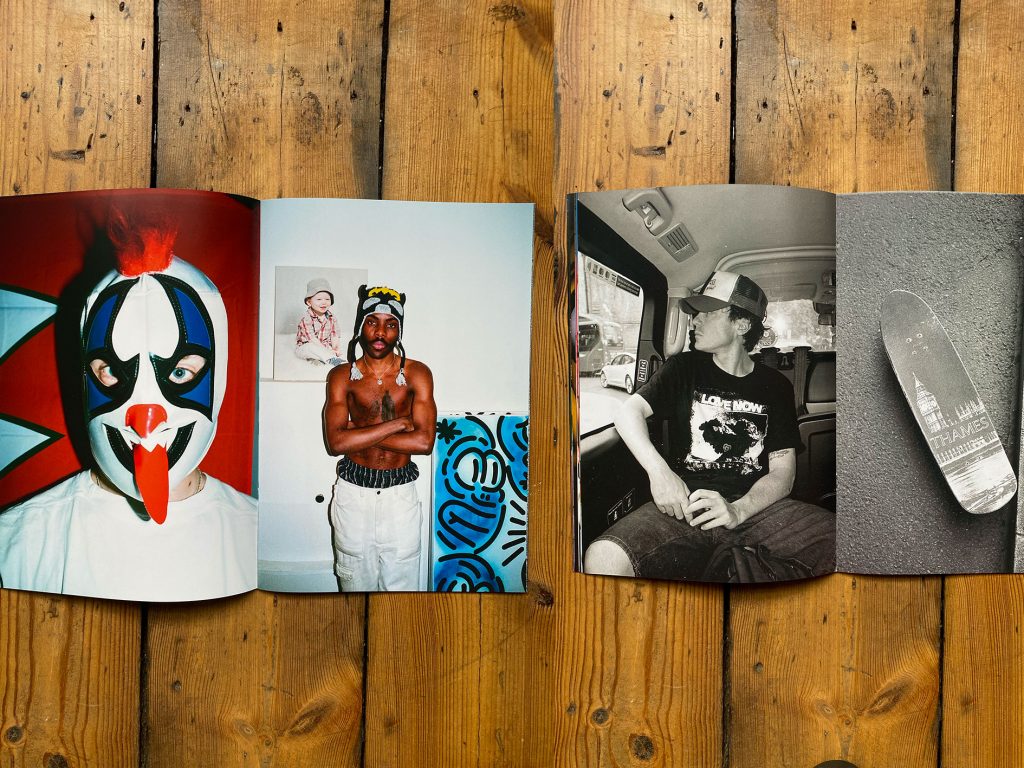 Excuse the stereotypical British question, but how have you adjusted to the weather? Especially for someone who skates and is forever outdoors…

I have had a pretty hard time adjusting to that side of London. At first I couldn’t really handle how much everything slows down. I think after last winter I need to get away for the next one, hence why I’m heading back. I can’t wait to be in Sydney and NZ over this next summer.

This isn’t your first zine, nor photography project. Can you tell us a little bit about previous work you’ve done?

I’ve kind of always been shooting and collecting pictures. As soon as I started travelling to skate I thought it was such a crazy life experience, some of the places you end up and find yourself. I may as well bring a camera just for the memories. I slowly started paying more attention to the photography side of it, and interest in making zines or developing my own film. It’s an interest that I really slowly fell into. I made the first School Holidays zine last year and wanted to make another. I’m not really sure what’s next but I’m always shooting and collecting things, I guess I’m just hanging on to certain things I like and will try to let a theme occur naturally. I would really like to make a hardcover over a longer term, so maybe that up next. 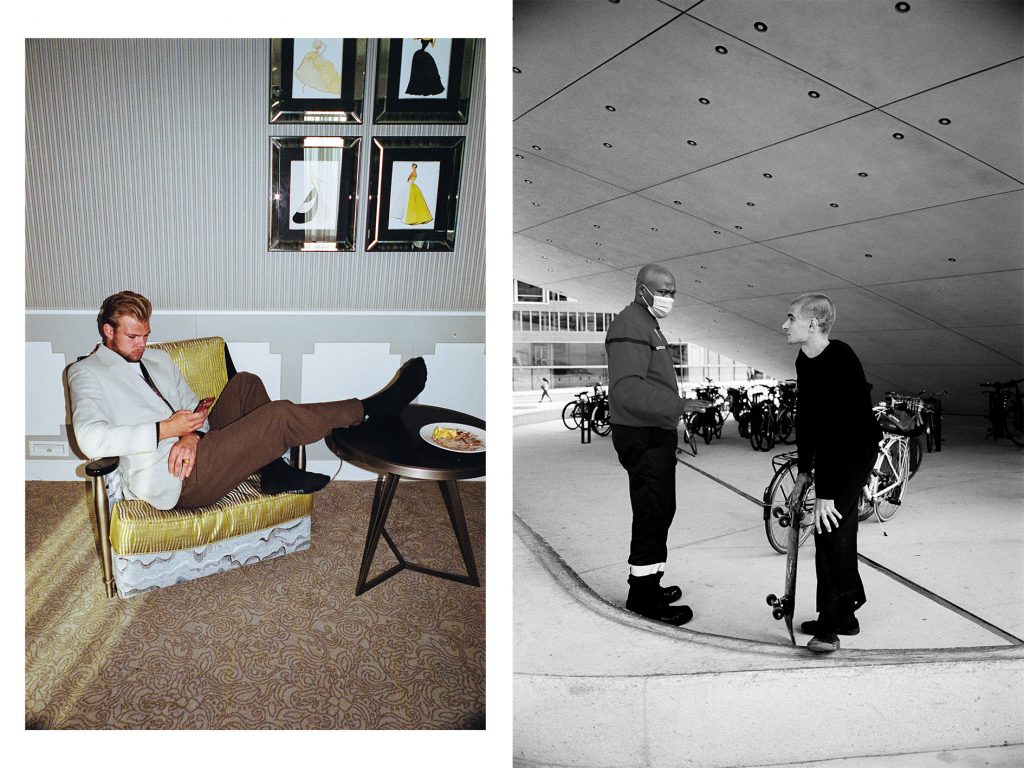 You shoot mostly (all?) you’re photographs on film. How are you surviving with the steep increase in price on rolls?

Yeah I am, The increase recently has been crazy. I’m just slowly stocking up wherever I can find it cheap or putting any money made from zines/jobs back into it. I’m taking it really slowly and just want to make things/take more photos.

What/Who are your biggest sources of inspiration when it comes to photography?

There are honestly too many to name. I thinking being around Imogene Barron made me really want to have a camera on me at all times, she really pushed me to shoot more so I owe a lot to her for that. Paul Grund is another who really makes me want to explore the technical aspects, and start developing and printing stuff myself. Also Quentin de Briey, who’s work constantly amazes me. 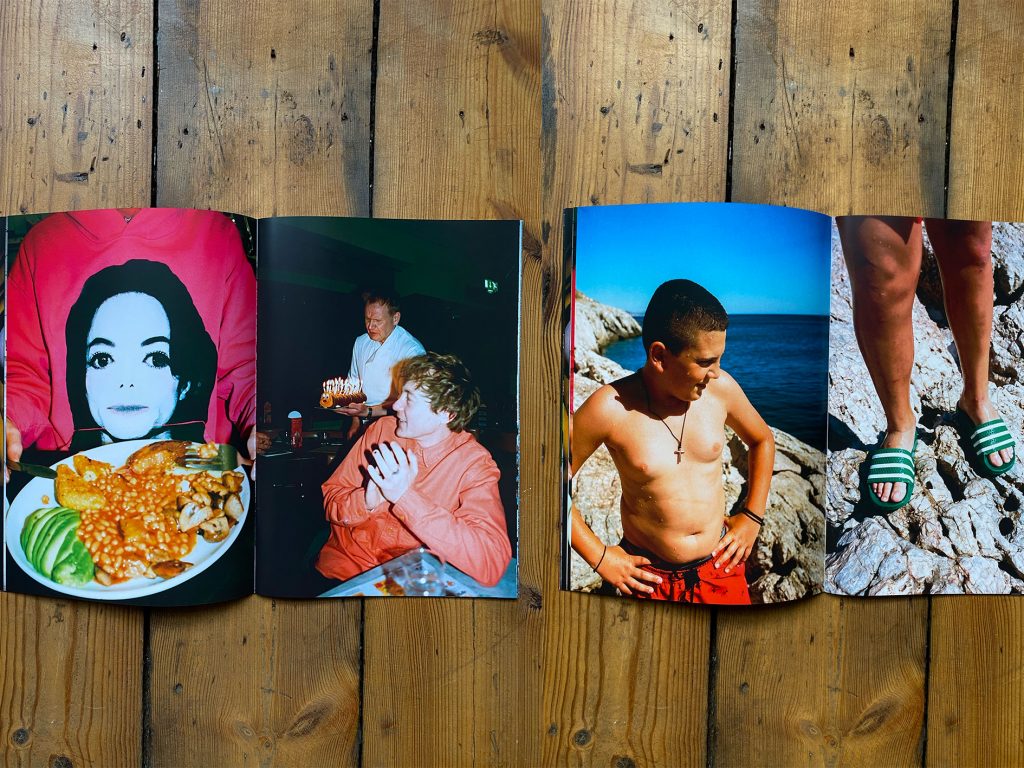 We saw you were in Paris recently for fashion week. Were you working or just there for the good times?

That was such an amazing time. I just had a bunch of friends that were going to hang out, some had jobs on and some didn’t but it sounded like it was going to be a great time. I ended up shooting BTS at the Mowalola show which was an amazing experience, I had never shot or been to a fashion show before, and that was a super special one to be able to see, big shout out to FreddyParc for linking that one up. I still have no idea exactly which direction I want to go with the photos, so its nice to be able to try different things and see what I enjoy.

On the skateboarding front we gather you’ve been chipping away on a new part for Adidas for a little while between injuries. When can we look forward to it releasing?

I have been working on a project through Adidas and Free skate mag with my friend Sirus since last summer. It was actually supposed to come out around March but I ended up having an ankle injury that lasted from January – April. It’s been nice getting back to skating and am glad to have it all finished. We are just about to start the edit and it should be released late this month. 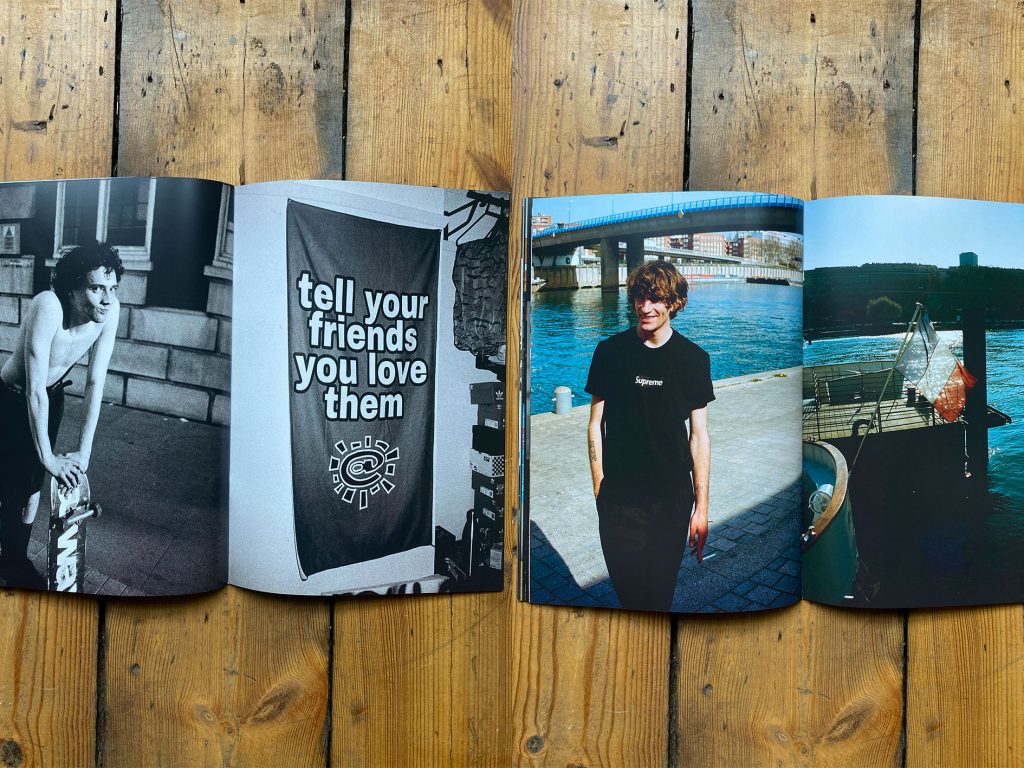