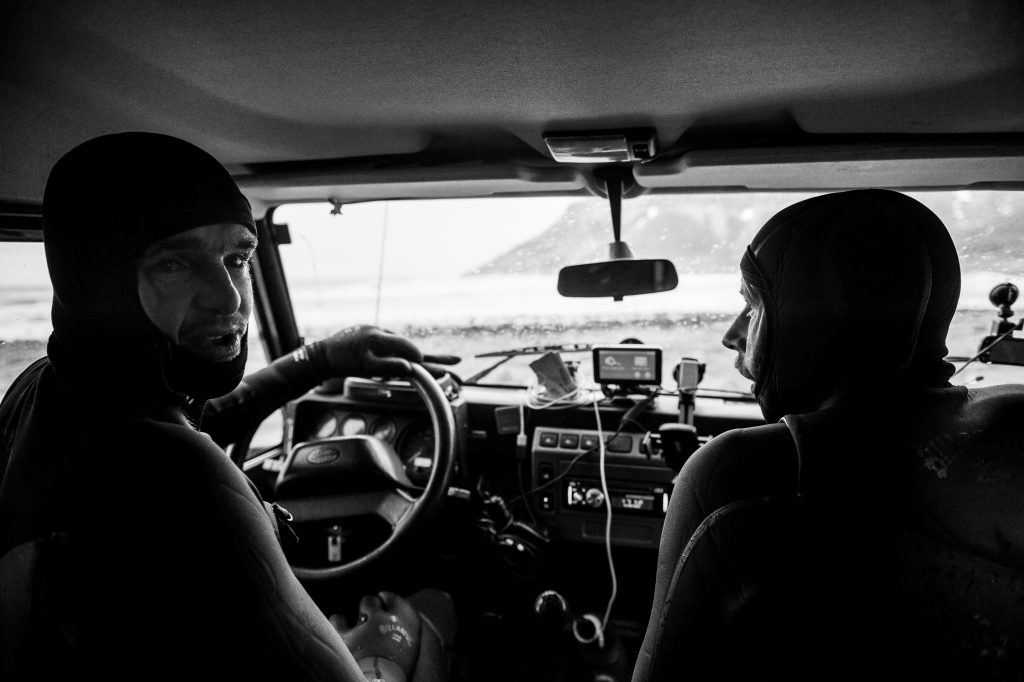 The land rover swings violently to the right. Buffered, Billabong A-lister Ryan Callinan mutters a “Gettttt fucked” from the back seat. It’s windy. It’s more than windy. Ireland is windy. Scotland is windy. Iceland gets a little blustery, sure. But this is next level. It’s not uncommon to hear of cars being picked up like toys and dumped across fields, fish being blown out of the sea, onto the beach and into gardens, or even worse, the cuddly (and if we may, delicious) sheep being quite literally blown off mountainsides to their inevitable demise.

Situated in Norway’s northeast region, the birthplace of Norwegian surfing lies amongst the Lofoten Islands, an archipelago better known for its fishing than its waves. Ironically now considered far flung, Lofoten was once the centre of European life, forming the seat of power for the Nordic Vikings, firmly knitted into the trading, social and political tapestry that wove together European life. But fast forward a few thousand years, by plane, train and all-terrain automobile, it’s a total fuck-around to get to. We’re talking four flights from LAX. Four flights from Bilbao. Five From Hawaii, and six for our beloved friends in Australia. True to form, an overnight stop in Oslo to amalgamate with our international production crew is not only recommended but required, with the hotel bar acting as the spoonful of sugar to help the medicine go down. 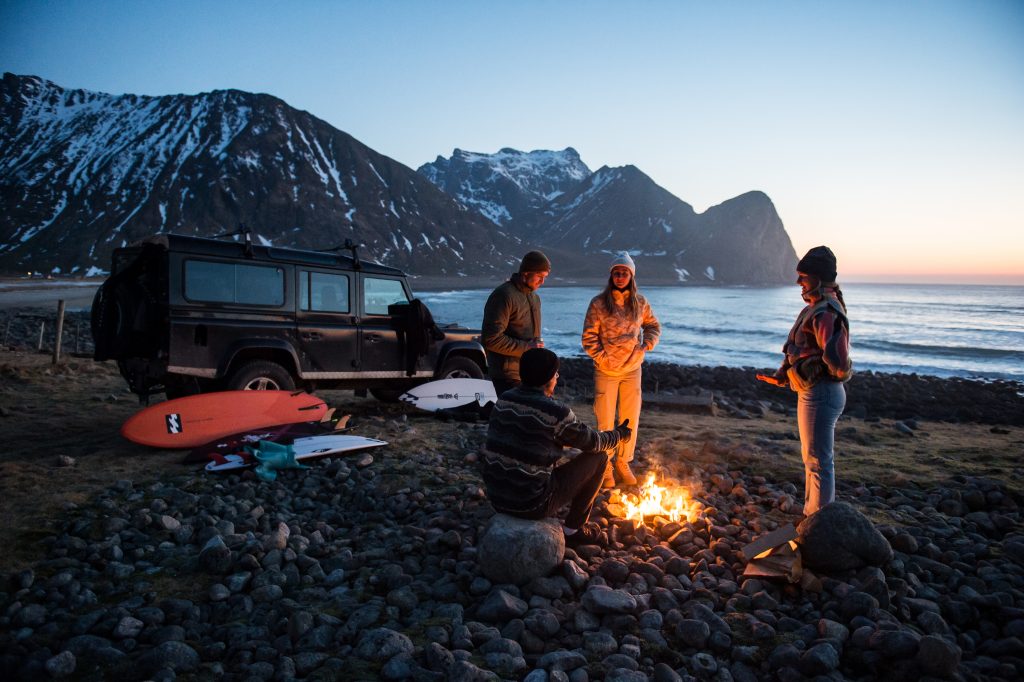 Our crew consists of Ryan Callinan, the most motivated of cold water surfers, Luana Silva, whose youth is not to be underestimated, Jack ‘Granite Godbod’ Freestone, as well as recent Billabong signee, Anna Guadauskas, rounding off our uniquely inclusive travel crew. Two CTers, an ex-competitor with a ballooning vlog presence bit by the alternative board craze and a bubbly, immensely optimistic California longboarder means any wave we do come across will work for somebody…and boy, do we come across aplenty. Our 4x camera clad, yellow North Face jacket wearing leader comes in the form of Christopher Burkhard, a man who’s spent nearly as much time exploring this land by foot as he has by heli (a fact he’ll happily divulge if questioned). An adventurer sure to be revered by the Viking Gods themselves, every yellow North Face jacket clad amateur photographer north of Oslo, or maybe even Madrid, seems to have gotten word that he is in town (or in Fjord) and he is promptly swamped by offerings and sacrifices on the alter of Sony.

But back to Unstad! A small village, with only 15 full time inhabitants, it’s in a hollow, surrounded by mountains over 2000 ft tall. Nowadays,  access is easy through a tunnel but we’re told back in the good old days it was the road over the top that was the only way in, and the only way out. It used to be pretty common to be totally snowed in for weeks on end. The road has changed things in Unstad, with travelling surfers now a daily occurrence. Their arrival signals the business needed to keep Unstad Arctic Surf afloat. While ‘people’ are often a hindrance to the unending chase for empty waves, the built-in environmental factors (read: insane cold, impossible travel, exorbitant prices) means that a crowd here looks like five people. Maybe seven if it’s a really good day. This is all to say, there’s no shortage of waves. 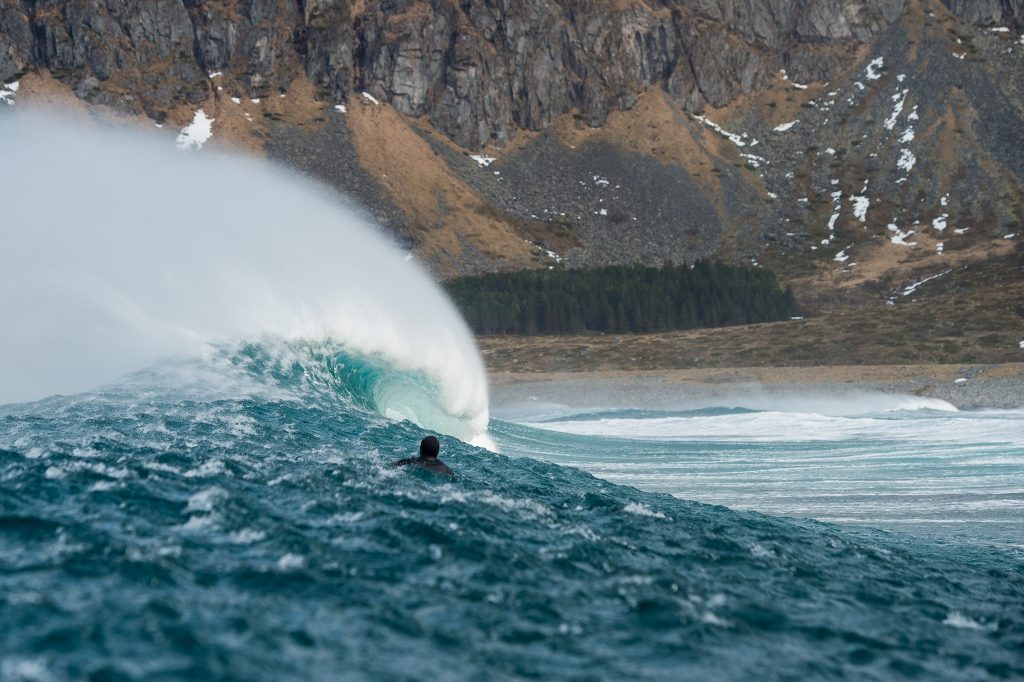 Our arrival in Unstad is met with a ‘World’s Best Cinnamon Buns’ sign fluttering in the wind. Turns out they weren’t lying, they really are the best. Made fresh daily, their warmth is only exceeded by that of our host’s smiles, which go perfectly with the property’s half dozen saunas and hot tubs. Beers are drunk in the hot tubs with increasing ferocity post-surf and you can’t help but think that the Norwegians have it all worked out. What began in 2003 as a mere board rental shop has turned into one of European surfing’s meccas, with people coming far and wide to experience not only the waves but the Frantzen’s excessive hospitality. Our inaugural dinner took the form of local culinary delights, with mutton, cod and free-flowing Tuborg pouring favourably upon arrival. 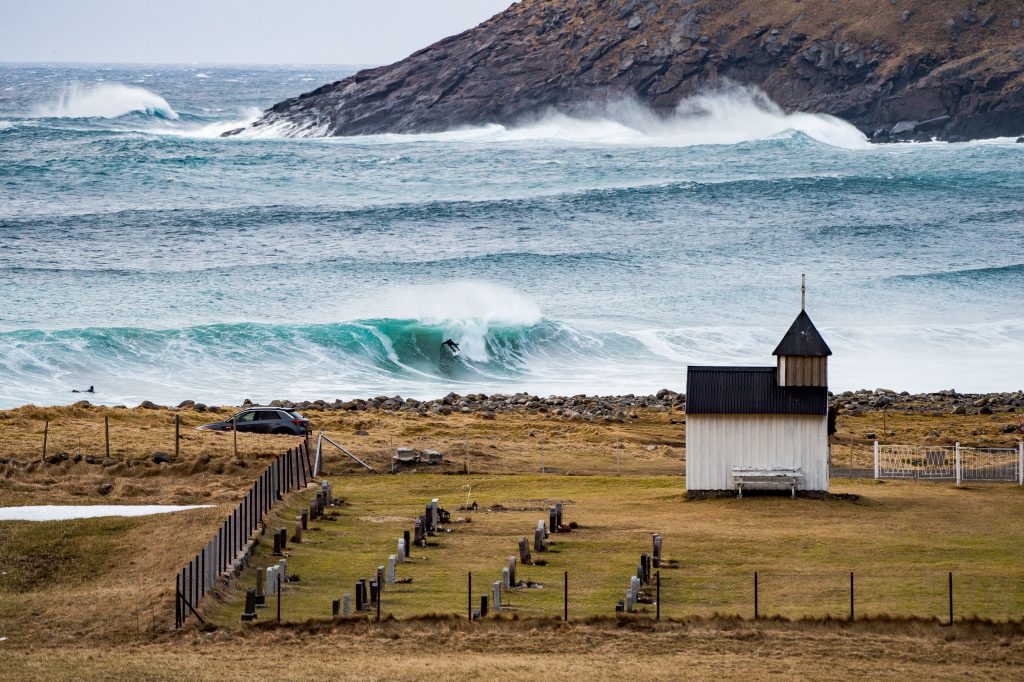 There’s a buoyant surf community in Norway and Unstad is very much the hub. Despite the access being long (we meet one guy who’s driven 20 hours from Sweden to surf), it’s good vibe central, with Tommi and Marion being the rock solid cornerstones of the community. “It’s not actually that cold,” Tommi shouts over the wind. By my reckoning it’s about 0 degrees, plus the 20 knot northerly wind probably shaving a little off that. But hey, when -20 is the status quo it’s really not ‘that cold’.

As for the actual waves? Options are aplenty, with the lodge situated smack in the middle of a wide clam-shaped bay featuring points on either side and a rangey beach break in the middle with multiple outer bars. The sand on the right wasn’t working during our stay, and while the occasional hero tube was found in the middle (Mr Freestone!), the majority of our immediate focus lay on the left. Seemingly playful, the end section is in a word, hell—sucking dry over football-sized boulders. Well, we should say hell for the crew, as our talent had no problem figuring it out. “It’s so fun, I just want to have some water and go back out,” Luana gushes as she runs up the beach, with a face completely blue. We’re predicting big things for the young Hawaiian, already on the CT aged 17. Meanwhile out the back Ryan manages to swoop into what appeared to be an unbecoming lump, fly down the line, link six turns together and step off perfectly onto the sand…proving full force why he has maintained his place amongst surfing’s elite for the better part of a decade. Quietly shooting super8 from the back of the land rover, some of his stills grace these pages. Often to be found beer in hand and wearing a wide smile as the sun dips, we’d like to think that wider competitive surfing could take a leaf from Ryan’s book. 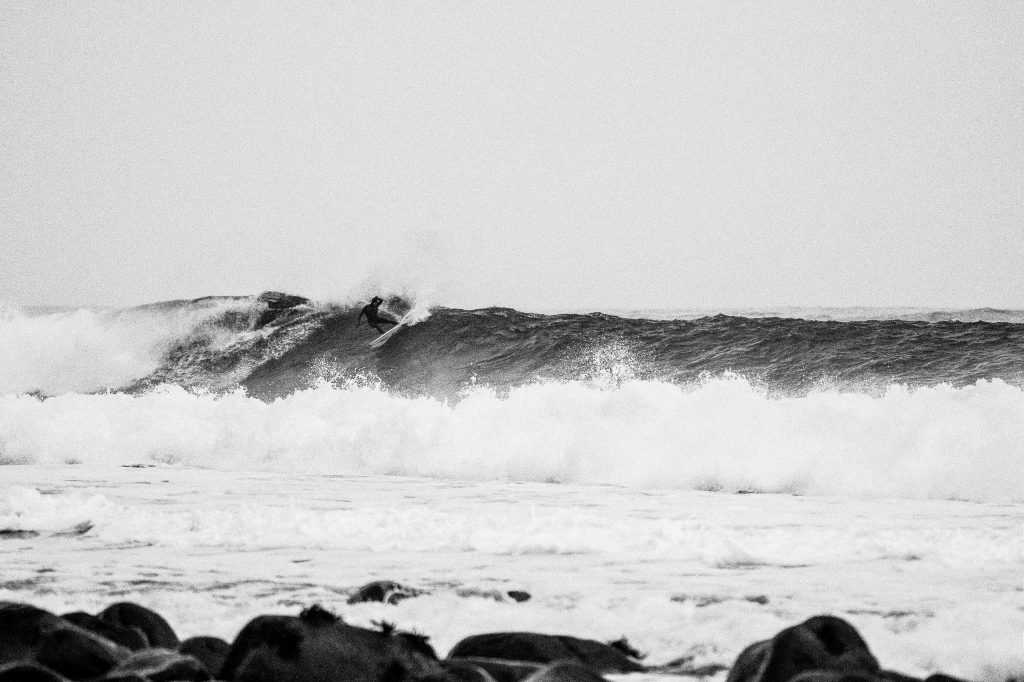 Even with Burkhard’s immense knowledge, the going when navigating our earth’s poles is never easy. But his local knowledge of the region proves fruitful, with each day’s wind and swell direction being meticulously picked over to the sounds of different nooks or crannies within the island’s three-hour radius. And yet, the saying ‘never drive away from good waves’ has never rung more true. Even via helicopter, the Fjords eluded us and finding something, anything, was deemed impossible. Tommi and Marion were on to something when they decided to lay roots in Unstad, but little did we know just how far back their story went.

Marion’s father, Thor Dagfinn Frantzen, was, not only a pioneer of Unstad, but was in fact one part of Norway’s first surfing pair. He and his best friend, Hans Egil Krane, brought surfing to Norway by way of Australia. Both men had spent their youth working on boats in the fishing industry. Before oil was discovered along Norway’s coast and the subsequent black gold rush that followed, the country was incredibly poor, leading many to leave in search of work elsewhere. Hans’ love for the ocean developed into his becoming a commercial diver, work that took him to Australia for an extended stint, during which a workers strike led to his discovery of Bondi beach and of course, surfing. Upon his return to Norway, Hans wanted to continue his newfound love affair, naturally tapping his oldest friend Thor to come along for the journey. Back then, Norway had nothing in the way of surf equipment. And when we say nothing, we mean zilch, nada, absolutely zero. For those who aren’t following, we’re driving at one distinctive point: no wetsuits. Thor and Hans used to surf in three-minute stints, running out, catching a wave, coming in and attempting to warm up until they couldn’t take the cold anymore and had to call it quits. 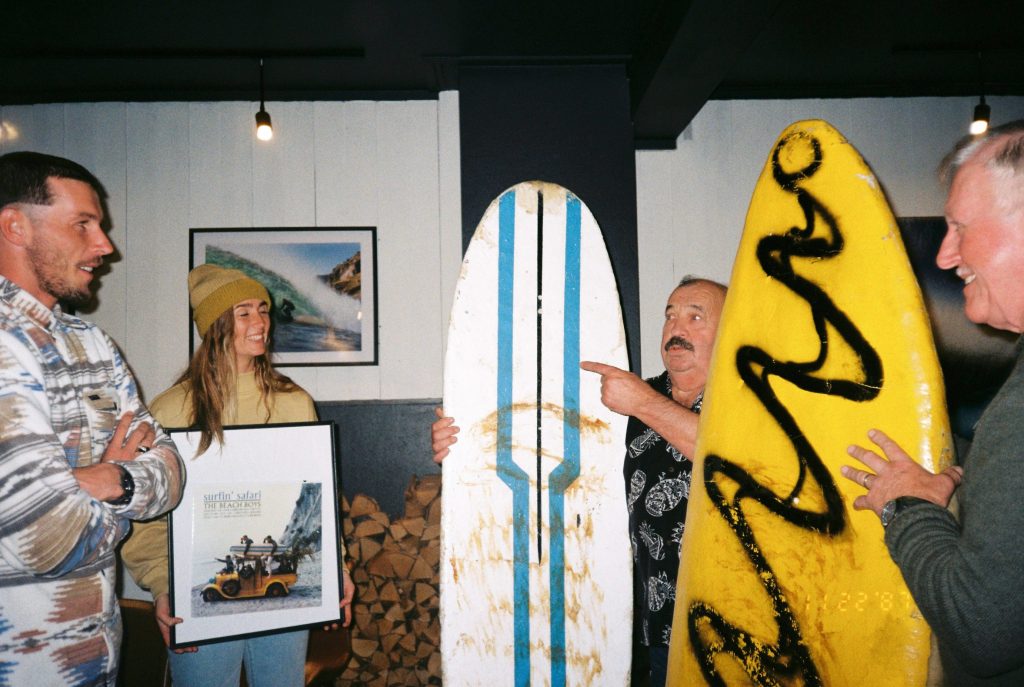 Speaking with Norway’s first surfers is a humbling experience, taking place in the shadows of the surfboards they made themselves out of necessity, still intact to this day. Shaped from refrigerator foam and directly inspired by the Beach Boys’ classic Surfin’ Safari cover, the boards have survived not only decades of use from two formidable Norwegian men, but a house fire as well. Hans’ house burnt down in an accident and these boards were the only two items that survived…so when Thor offered our Mr. Freestone the opportunity to surf them, Jack graciously declined out of fear of being the one to bring these boards to the end of their natural life. You don’t fuck with history, even if it’s being handed directly to you by a man named Thor with a thickly moustached smile.

Back to the trip. What we lacked in alternative wave setups we made up for in opportunities, namely the chance to explore the tapestry of beautiful Lofoten. Snowcapped mountains soaring above untouched crystal Fjords, churches that look as if they pre-date religion itself and of course, fishing villages that seemingly accompany every outlet from land to sea. One in particular, Nusfjord, captured our hearts in the form of an Italian pub serving pints and pizza with Ronan Keating blasting full volume, while the hundreds of cod that make up the days catch hang to dry outside. 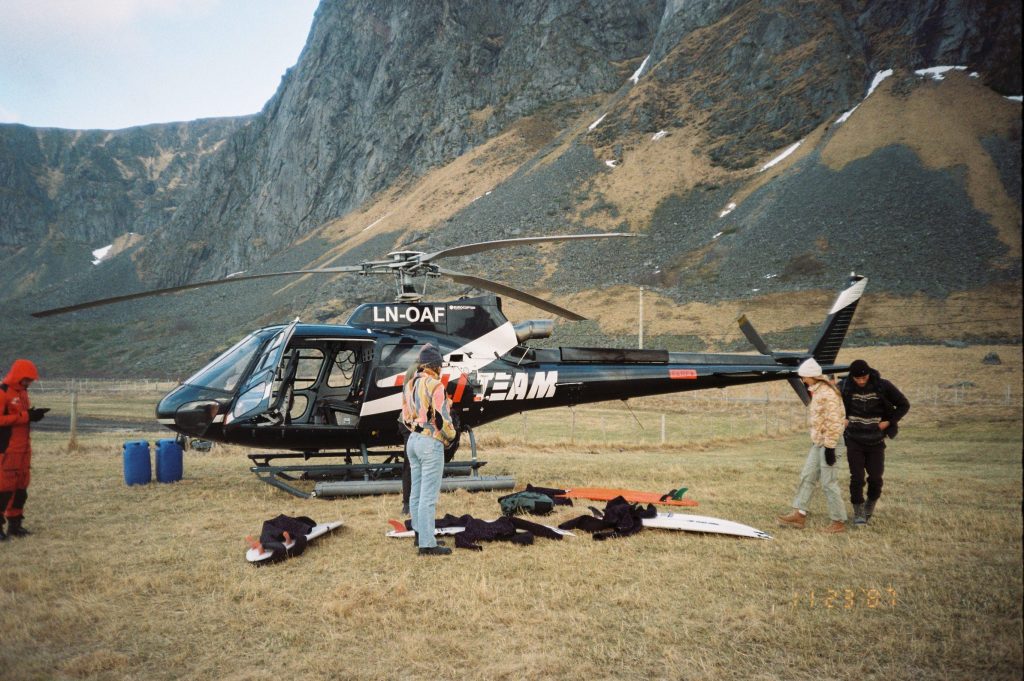 Our days in Lofoten drew sadly to a close. Flying out over the impending ‘snow bomb’ that’s about to hit, we had a traditional dinner in an old Viking long house—the largest Viking house ever discovered and the original seat of power for the entire Nordic Vikings, which is quite a big deal if you consider the reach that seat of power had in the world we live in today. After the week’s adventure we’d had, looking around the table of wry smiles, smiling ever the more with our glasses filled with mead, all we could hope was that our Viking predecessors would be proud.