Skip to main content
Close Search
Back to Originals Next post: A Year In Review #7: Volume X

The Land that God Built in Anger.

The name given to the Skeleton Coast by the native Bushmen due to its inhospitable nature.

We left Cape Town in the rear view mirror. A week of Duct Tape had ended us. We were broken men. Vineries! Nightclubs! A bar called Van Hunks. The good times. Hangovers so bad our editor left on a IV drip…the not-so-good times. A hospital discharge later and we were on the way, chasing a swell we knew little about but hushed whispers of good direction in the jazz bars of Cape Town sparked our curiosity. Calls were made to reliable and unnamed sources and flights were booked.

We arrive at Windhoek. Home of beer and, well, not much else. It’s a recurring theme in Namibia, there isn’t really ‘much’. Welcome to Namibia—from the word Namib, or Nama—meaning ‘vast place of nothingness’. Enter the world’s least densely populated country after Mongolia. We pick up our trusty Hilux; Toyotas are an absolute must for the discerning freedom fighter or surf explorer and the Hilux is king…good enough for the Taliban, good enough for Somali warlords and militant separatists the world over…good enough for us. The rental guy informs us to be really careful of sandstorms, a real and apparent danger. Last week, the east wind brought with it a 50 degree heat and a week of sandstorms. Read: seven days of staying indoors. Full tatooine vibes.

We fire up the Hilux, fuel up with biltong and Monster, and hit the road headed west, which because of ‘surf laws’ is as much as I’m allowed to say, but it’s hours and hours and hours through nothingness. The great Kalahari Desert, via the trans-Kalahari Desert. Grass plains, mountains in the distance, desert, mountains always in the distance. Driving into a golden four-hour sunset. 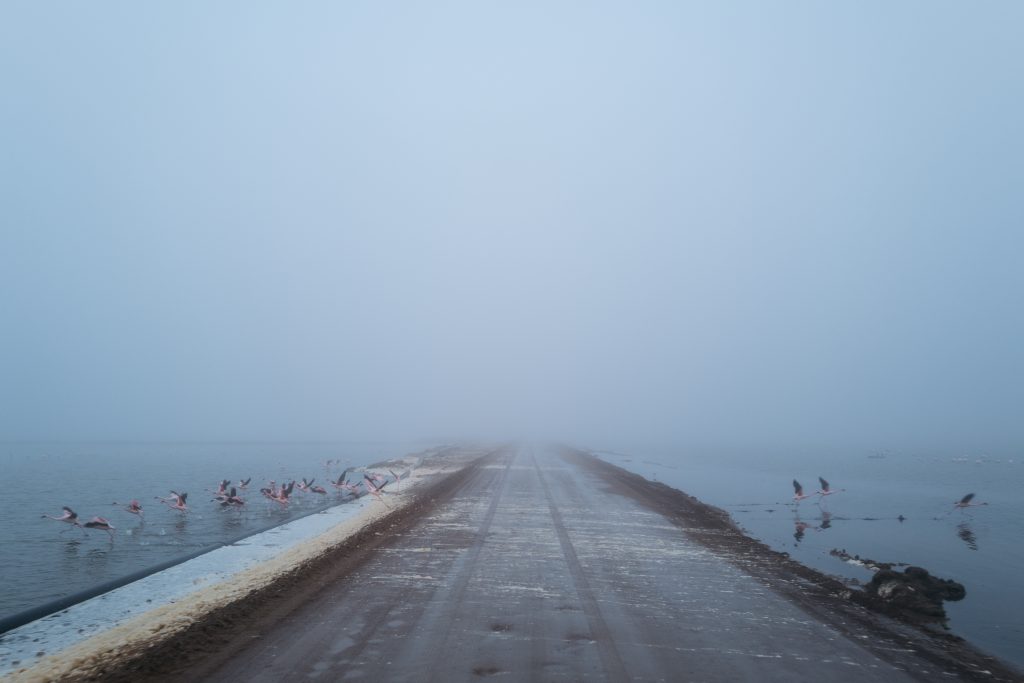 We wake in a town I’ll decline to name but will say, at best, it’s ‘frontier’ living. The region is renowned for its cold desert climate, a rarity but a real thing. With temperatures hovering around eight degrees at night, the mornings are so foggy that surfing is impossible. The Portuguese sailors that discovered the Skeleton Coast named it The Gates of Hell, and for good reason. The coast is littered with shipwrecks, those making it to or from Cape Town in vain, fallen victims of the infamous fog. We start to make our way to the infamous Skeleton Bay. It’s miles away from anything, a voice note providing the only direction we have:

“Drive past the salt mine, keep driving until you reach the sand. Drop your tyres to 1.2 PSI or if you don’t have a gauge, 40 seconds of air from each tyre. Keep driving on the tracks to the left as the sand is harder. Don’t drive near the lagoon, it’s quicksand and you’ll lose the truck. Keep driving 5km then veer right after the ridge of sand. When the tide comes in and you have to cross the water, keep in second and third gear and full gas. Whatever you do, don’t stop.”

We drive and drive and drive. We see seals. More seals. Seal carcasses. Whale bones and jackals stalk our every move. We get stuck. We dig. Sand tracks. The Vans Duct Tape Joel Tudor ceremonial skateboard is our shovel. There are five of us, each man has a wheel and the driver drives. We drive on. We get stuck again. We haven’t quite worked out sand driving at this point (speed is everything, wheelspin ain’t), but finally, we can hear waves, and there’s that familiar smell of salt. And shapes moving in the background—as if on cue the fog begins to lift.

The wave reveals itself. 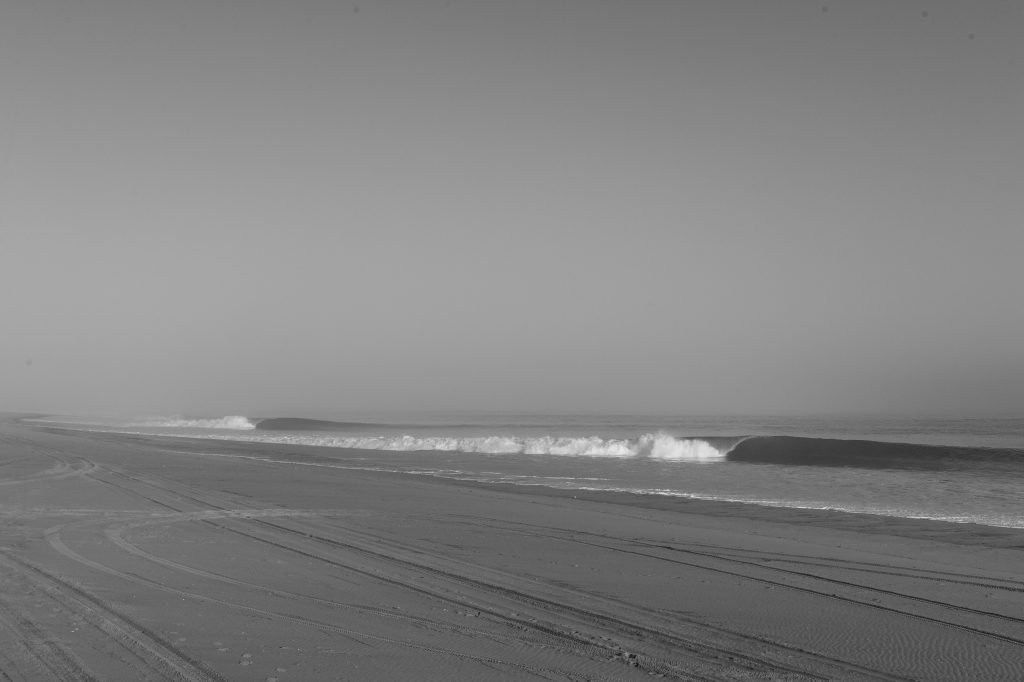 Seeing Skeleton Bay for the first time is hard to explain. The playing field is too big to comprehend. It spins its way down the point, unfurling. Some sections fun, others square. It grows. It shrinks. It never sections. It seems rippable. It isn’t. We’re told that the bank isn’t the best; it’s a little out to sea but still. These are the most perfect waves we have ever witnessed. It looks 3ft but is 6ft. A 4ft wave can grow to a 6ft’er down the line. A solitary post, hammered into the sand marks the peak but you paddle out 1km up from the marker to allow for current. The end section is death. A pounding shore-break of both dead seals and alive ones looking on in indifference. That’s if you are lucky enough to end up there and not in the rip that sucks you out to sea, where a watery grave awaits.

Our days are spent as follows. We wake at 6.30. We pull on mud-caked clothes. The sand in Namibia is so hard packed when mixed with the moisture and the mud and the fog it becomes its own brand of cement. The Lighthouse Family plays on repeat at breakfast at the eerie hotel, the same as the night before when we arrived, no doubt the same as the day before that and no doubt the days to come. We order fruit bowls, the only breakfast available with no power on offer.

We load the truck, we pass the salt mine, pass the salt lake. We wave hello to the flamingoes, we have We Love Flamingoes written on our truck, because we do love flamingoes. There the road ends, we hang a right on the sand and try and guess if we have taken this track before, within a week we are perfectly in tune with which seal carcass marks which track and where the lagoon has overflowed into said tracks, producing the dreaded quicksand. “We lose cars there,” an Afrikaans man tells me solemnly. We sit in the car losing our minds waiting for the fog to lift. Trucks with other surfers occasionally appear in the fog like ships in the mist, the haze of the sun above the fog shimmering like a mirage. The fog lifts, we scramble. We surf our brains out. Gearoid has a couple of absolute drainers, from the top of the point all the way down. He later says one of them was the best wave of his life. I watch Brendon from the shoulder park himself in a 300m double up, barrelling the entire way to the horns and hoots from a collective of parked-up Hiluxes.

Surfing Skeleton bay is a physical affair. The current moves unbelievably fast, powering down the point. Surfers and bodyboarders of notable ability do runarounds without catching a wave, oh and the runarounds are 2-3km each time. Gearoid reckons one day he did 10 runarounds. The mid-size ones go underneath you. The large sets run wide and the double-ups are terrifying. It’s cold enough for a 4/3 and boots, but when the sun hits and you are jogging k’s up the point, it’s torture. Exhausted, we make windbreaks and sleep by the car in the afternoon sun, waiting for the wind to drop. Sand is our life, it’s in every orifice, it defines us. Sandwiches are made on the tailgate of the Hilux; the filmers spend all day on the roof, through the fog and then the sun and then the wind. We leave.

We extend our tickets. The wave has us now. Our frontier town with two hotels and two restaurants (only one worth eating in) has us now. The initial swell dies so we opt to extend for the next one arriving in two days. Two lay days in the desert nearly sends us insane. Power cuts. No hot water. Just sand. We remind ourselves that the first crew to come and surf here, he of Wasted Talent reverence, Mr Evan Slater, spent three weeks here. Three weeks.

We surf the last day. The swell has jumped and spring tides have prevailed. A collection of 4x4s leave at the same time, and we inadvertently end up in convoy. Driving through the desert is quite something. With no road markings, and no well, anything, it’s hard to gauge distance and direction. Especially when where once was desert is now a lake of saltwater, where the beach was is a river, waist high and flowing fast, the far end is the quicksand lagoon and in the middle is just, well—sea. Nervously driving in convoy, we’re told the only way is through. We make it, just, water spilling in through the door seals and up into the intakes. We pack our bags and start the long drive across the Kalahari Desert.

Our trusty Hilux dies on the way to the airport. 400km from Windhoek. But that’s a story for another time.