Known primarily for his surf video credits, we were pleasantly surprised to see Morgan Maassen turn his attention to snowboarding in recent times, having worked closely on KORUA Shapes’ latest release Rain Dogs.

Naturally we hit up Morgan to discuss how his latest venture came to be and talk about some of his favourite memories and photos during his trip to Mount Bachelor.

“As a life-long surfer, my exposure to snowboarding was (shamefully) only brought about recently, as visiting the snow was something far-off both my family’s radar and my own free-time in my early twenty’s. Upon my first run though, I was hooked, and the ensuing deep-dive into the culture landed me at the feet of Korua’s social media, where i fawned over their obsessive hunger for speed and design. My cries for attention were finally acknowledged and I was invited to join the team as they sojourned across the Pacific Northwest at the beginning of 2020.

I met the Korua crew on a dreary February afternoon in Portland. Slightly downtrodden from a wet experience at Mt. Baker in Washington, they had their sights on Oregon’s Mt. Bachelor to see if a change in luck was in store. The ensuing week of snowboarding was absolutely wild. No two days were the same; some eerily calm with fresh trails to explore, others wind-swept to high hell, ice blasting through every entrance of one’s garments. The mountain was breath-taking, a towering volcano that loomed over the little town of Bend. We explored every centimetre of it, weaving in-and-out of ski schools, lot lizards, friends and foes alike. Evenings were spent sampling fine beers, hiking national parks and taking in the majesty of Oregon, a state I reckon to be the most beautiful in the country.

As I tried to keep up with the crew, juggling a Red camera and a few of my heavy vintage lenses as we traversed ice patches and bombed groomers, my mind was blown. Watching Nicolas, Lars and Aaron snowboard to their level was awe-inspiring; like the first time I saw Kelly Slater or Stephanie Gilmore in the flesh. Absolute mastery, intersecting with so much style and wisdom. It was radical, and it challenged me immensely. I was not days off the plane from shooting free-diving under a frozen lake in Iceland, and trying to keep up with Nicolas on the groomers made that seem like a walk in the park. But in my deficit of ability, i found an incredible challenge of pushing my speed on the board, learning new mountain terrain, and operating a camera like i never have before. And at the end of every day when we’d watch footage, it was a rush to be so nervous to present my vision from my left-field, someone who went from zero to one hundred in shooting the sport. While I may have missed some shots or had some close calls a seasoned snow filmer wouldn’t have, everyone accommodated me immensely, and this quick jaunt up to Oregon turned into one of my favourite trips of this last decade of shooting”. 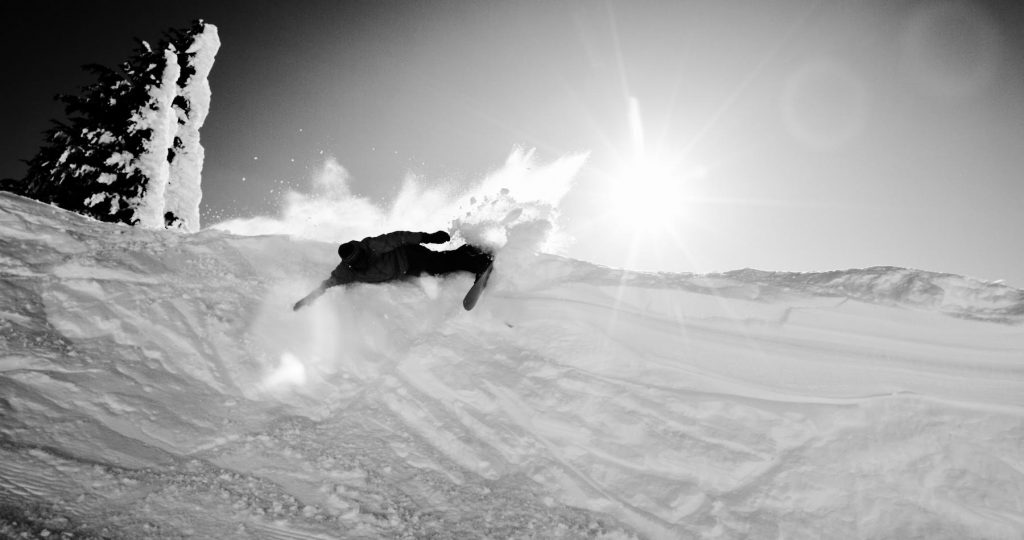 Nicholas Wolken’s snowboarding is my absolute favourite to watch; he draws lines and takes approaches to the snow that so perfectly show the sport’s genetic similarities to surfing. Nicholas is a trained psychologist, speaks perfect English, and has this absolute calm to his persona. It was  equally as eerie as it was fascinating to watch him survey his run, as his mind was crafting lines I couldn’t fathom, but once executed made perfect sense. 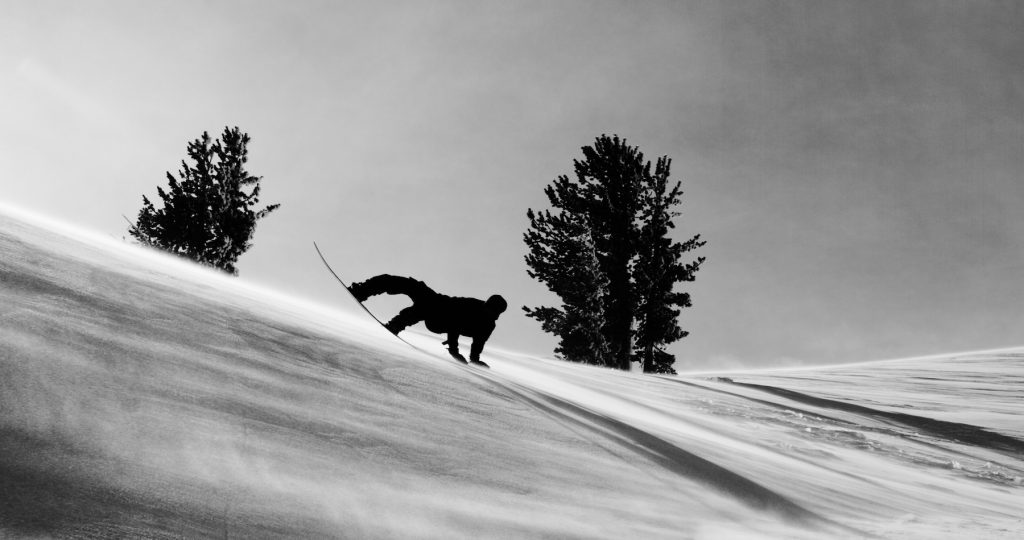 Lars Popp was the other main talent of the trip; a cherubic Swiss man who approaches every board and slope as something that can be toyed with. There was such an interesting juxtaposition in his style that I found riveting, that being that he explored every single piece of snow and ice and tree and bank and berm with his board, with such playful curiosity, but his style and execution was always immaculate. Equally as compelling was his skateboarding skills… the moment he was out of his snowboard boots he was pushing around the parking lot, flipping and airing off every bit of concrete. 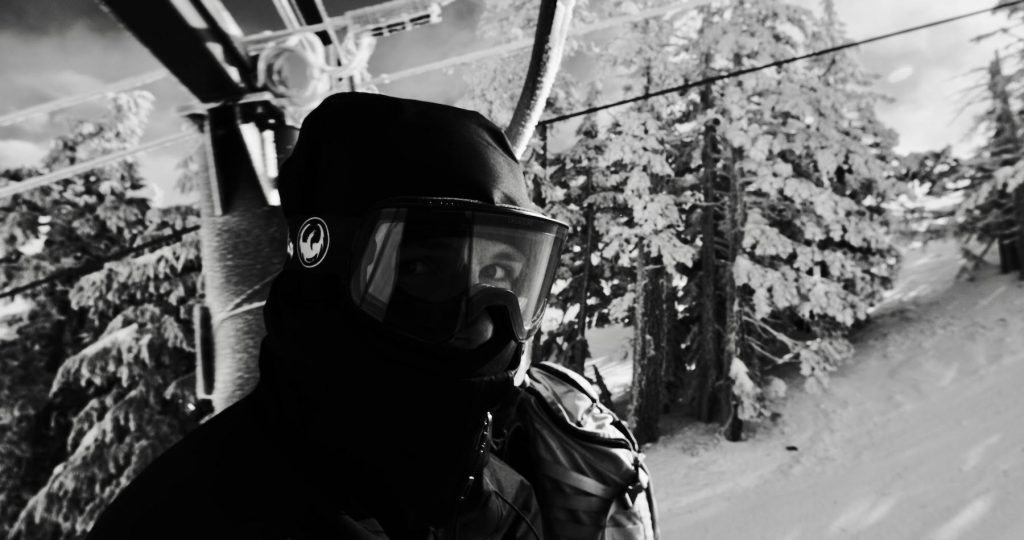 We all met up to explore Mount Bachelor, a large and wild expanse in eastern Oregon. The lifts run everywhere, but once you’re off them, there is so much terrain to explore. We had a blast connecting huge traverses to secret tree chutes and random birms and banks. We’d then take a breather at the bottom, smashing hot chocolates’ and these crazy addicting “Nordic bars” they sold at the cafeteria. 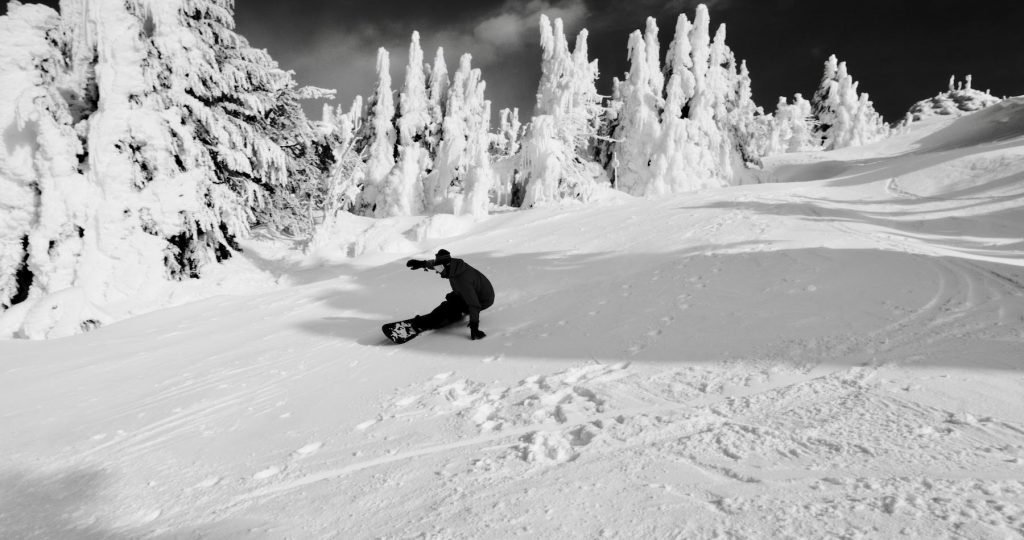 Our first several days made for some of the most incredible shooting, as the snow of a fresh storm clung to absolutely everything. Most of my personal experiences in the snow come from time spent in Chile, where the large volcanic mountains don’t have a single tree or structure on them… so I was elated to enjoy such surreal backdrops. 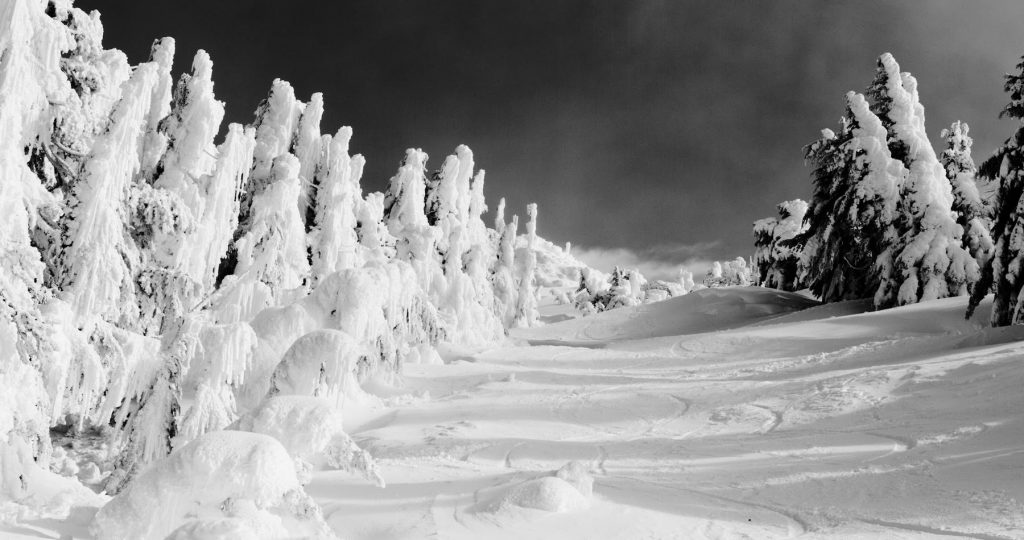 We spent our first day relishing this secret little gully, that had some epic pillows. It was a holiday weekend, and no one passed us as we ran laps up and down. This was the first time I really had the opportunity to work with truly professional snowboarders, and I had a field day. 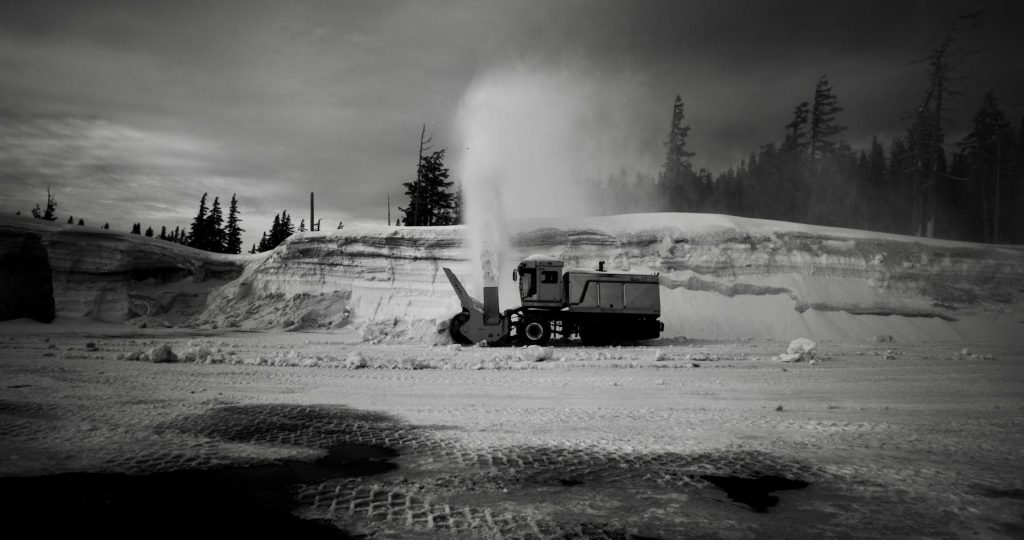 Common sights on the mountain, but something I still geek out on like a kid with airplanes. After a huge dump over the first weekend we were in Oregon, the snowplowers would clear the bank to make room for more parking and safe passage on the roads. 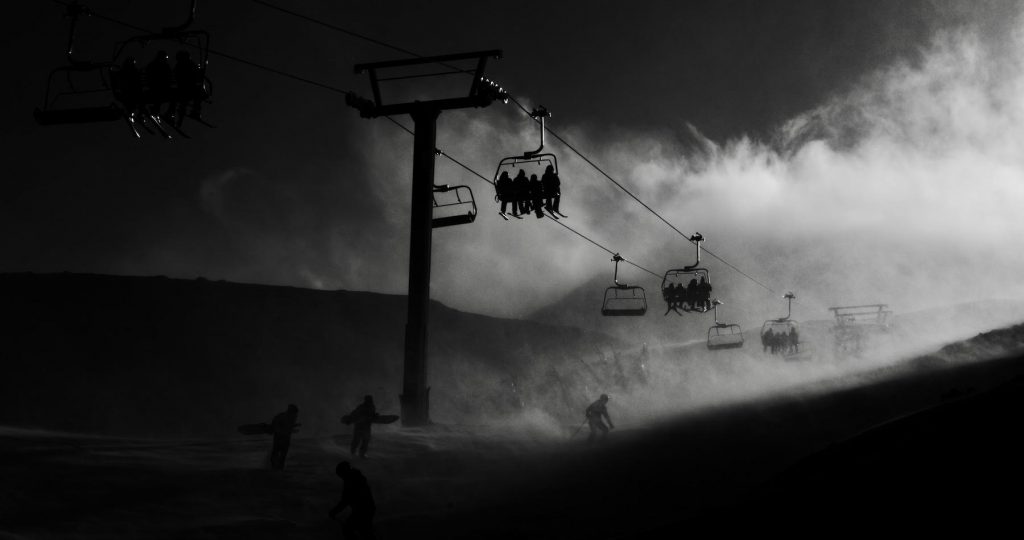 This shot is funny because the guys are hiking directly under the lift, with countless families staring down wondering what the heck we were up to. In reality, as we bombed runs, Nicholas and Lars would find certain sections that they would want to hit, and/or the corresponding shots I wanted to take. Like skating at a particular staircase or rail, this would warrant several attempts, different camera angles, an aborted run because of a wayward skier. Once we got the shot, we’d move on to the next section, only to do the same thing, sometimes hiking spots for 4-5 attempts. 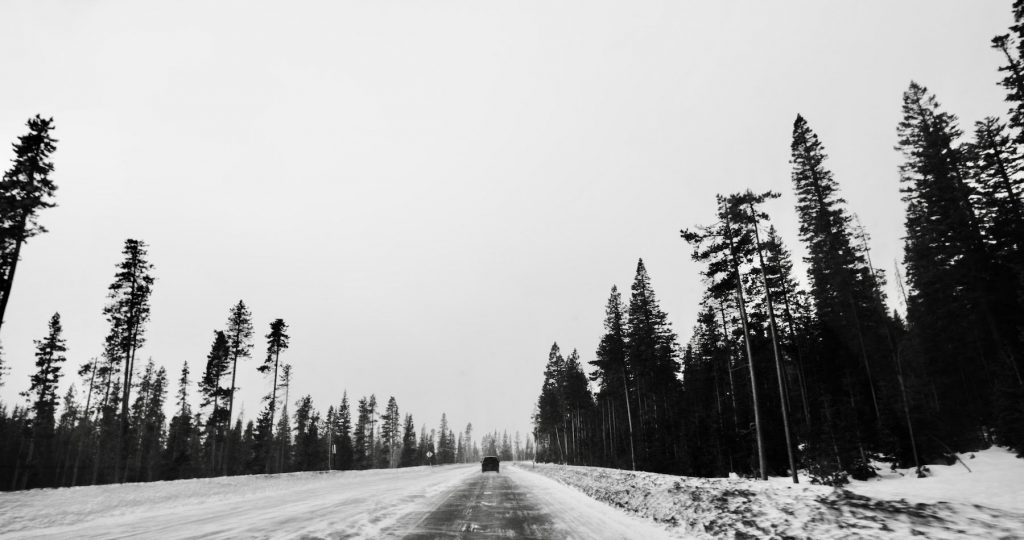 The road to Mount Bachelor is simply stunning. Leaving Bend, you follow a simple freeway through the trees until the view explodes. This day, the mountain is obscured by cloud cover, and the roads were salted but still treacherous to drive. On the windier days, the snow would blow the most mesmerising patterns across the roads, which was dangerously distracting amongst the traffic and dense forest. 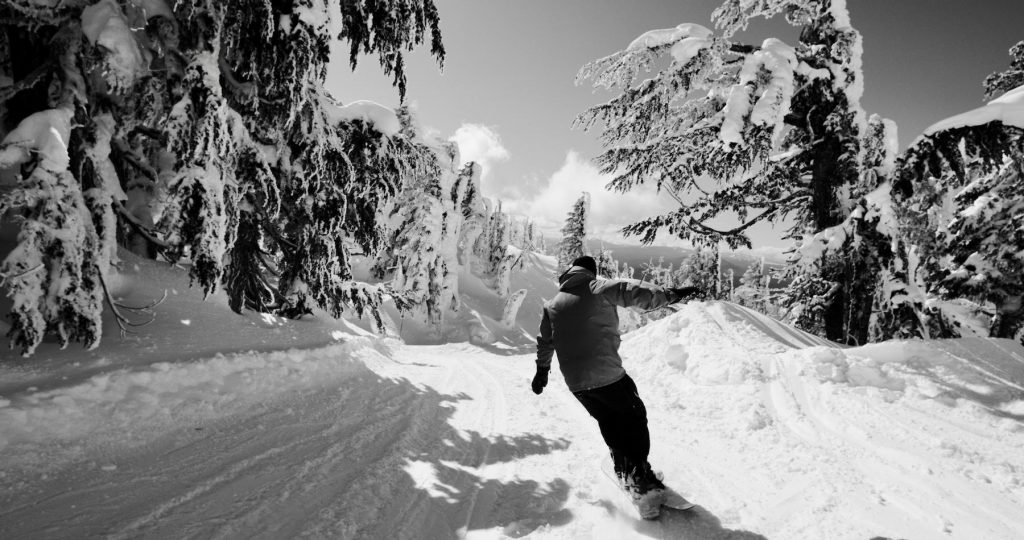 The backside of Mount Bachelor is one of the most beautiful places I’ve ever been, the world over. At the summit, you huck over the backside, and it opens up to this winter wonderland, with endless views of the Oregon mountains. Upon reaching the bottom, there is a cat track with so many fun hips and ledges, that we spent hours goofing on. On this particular part of the trail, Nicholas started experimenting with having his back foot unclipped, so he could do cross-steps on his board, in his quest to further emulate surfing techniques. 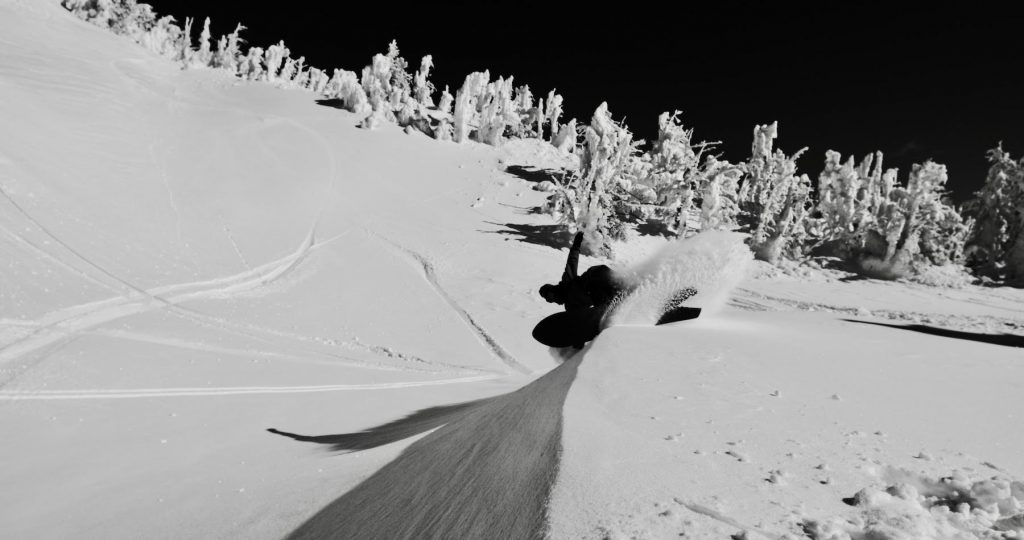 This mean little lip was at the bottom of the backside of Bachelor. The day they opened the backside, we were immediately on it, and the guys absolutely terrorized everything. Lars slashing into this lip was one of my favorite shots to get in the film, as it provided such a straight-on perspective of the board mowing snow. It also was hands-down the most terrifying, as I was completely buffeted by his snow, drenching every square centimeter of my Red with the fresh powder. Thankfully, everything survived, and a quick clean and re-assembly later (while siting cross-legged in a meter of powder) had me back up and running, shooting so much more cautiously too.